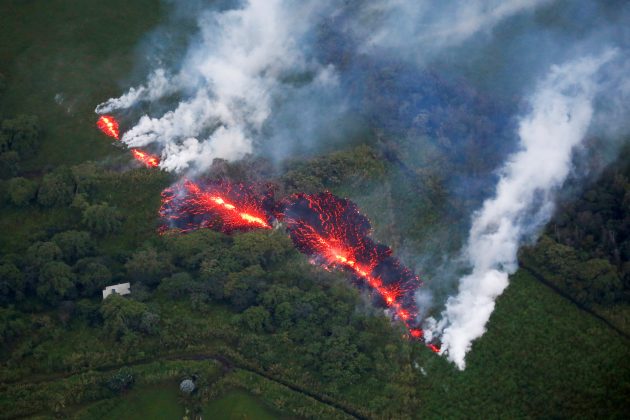 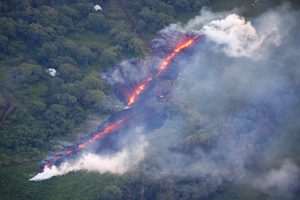 One new fissure from Sunday morning was a vivid gouge of magma with smoke pouring out both ends and was the 17th to open on the volcano since it began erupting on May 3. Some 37 buildings have been destroyed and nearly 2,000 people ordered to evacuate in the past 10 days.

Viewed from a helicopter, the crack appeared to be about 1,000 feet (300 meters) long and among the largest of those fracturing the side of Kilauea, a 4,000-foot-high (1,200-meters) volcano with a lake of lava at its summit.

“It is a near-constant roar akin to a full-throttle 747 interspersed with deafening, earth-shattering explosions that hurtle 100-pound (45-kg) lava bombs 100 feet (30 meters) into the air,” said Mark Clawson, 64, who lives uphill from the latest fissure and so far is defying an evacuation order.

Closer to the summit, in the evacuated Leilani Estates neighborhood of about 1,500 people, explosions could be heard in the distance as steam rose from cracks in the roads. The bulging rim of one fissure wrecked a building, leaving behind torn metal.

An 18th fissure opened nearby on Sunday evening at about 6 p.m. local time, spewing fumes and lava, officials said.

In areas where sulfur dioxide emissions were strong, the vegetation turned brown and leafless trees withered. 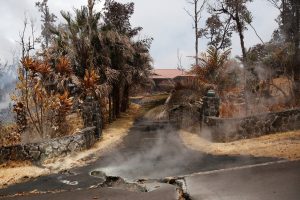 Volcanic gases rise from the ground in the Leilani Estates subdivision during ongoing eruptions of the Kilauea Volcano in Hawaii, U.S., May 13, 2018. REUTERS/Terray Sylvester

The U.S. Geological Survey warned that fissures could erupt throughout the area, and Civil Defense officials on Sunday ordered people living on Halekamahina Road to evacuate and be on the alert for gas emissions and lava spatter.

Meanwhile, other fissures continued to billow smoke over homes on the eastern point of the Big Island of Hawaii, the largest of the Hawaiian islands.

Even so, some people such as Clawson remained in their homes, confident they would be spared.

“We are keeping track of lava bombs. One went through the lanai (porch) roof of a neighbor’s house,” Clawson said. About eight to 10 neighbors had yet to evacuate, he said.

The Hawaii National Guard is warning people in the coastal Lower Puna area to prepare to leave, saying anyone who chooses to stay behind cannot count on being rescued. An evacuation has not been ordered there but might be if a local highway is cut off. 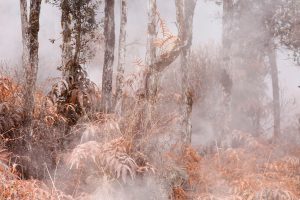 Volcanic gasses rise from the ground in the Leilani Estates subdivision during ongoing eruptions of the Kilauea Volcano in Hawaii, U.S., May 13, 2018. REUTERS/Terray Sylvester

“We’ve been telling them, ‘Evacuate if you can, because if we have to come in and get you we’ll be putting first responders at risk’,” Major Jeff Hickman told reporters. “There’s a point where we’ll tell our first responders, ‘Nope, you can’t go’.”