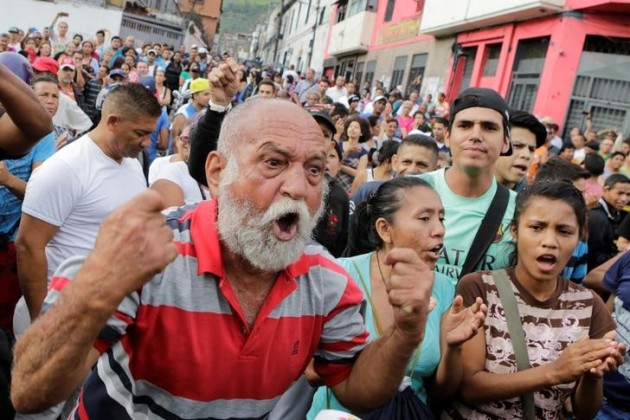 A man shouts during a protest over food shortage and against Venezuela's government in Caracas, Venezuela June 14, 2016. REUTERS/Marco Bello

CARACAS (Reuters) – Venezuelan security forces have arrested at least 400 people after the latest bout of looting and food riots in the crisis-hit OPEC member country, local officials said on Wednesday.

Violence engulfed the eastern Caribbean coastal town of Cumana on Tuesday as looters swarmed over dozens of shops and security forces struggled to maintain control.

There were unconfirmed reports on social media of several deaths in Cumana, the capital of Sucre state, and an opposition legislator from the zone said one man was shot dead.

But regional governor Luis Acuna from the ruling Socialist Party said the reported deaths were unrelated to the looting.

“There were only 400 people arrested and the deaths were not linked to the looting,” he told a local TV station, calling the looters vandals encouraged by right-wing politicians.

“I have no doubt they paid them, this was planned,” Acuna said.

With desperate crowds of people chanting “We want food!,” protests and melees at shops have spread across Venezuela in recent weeks, fueled by severe shortages.

Three people were shot dead in separate incidents last week, with a policeman and a soldier arrested in two cases.

According to a local monitoring group, the Venezuelan Observatory of Violence, more than 10 incidents of looting are occurring daily across the nation of 30 million people that is suffering a brutal recession and the world’s highest rate of inflation.

Venezuela’s political opposition says President Nicolas Maduro and his predecessor Hugo Chavez are to blame for failed socialist economic policies. The opposition is pursuing a recall referendum this year in an effort to remove him from office.

But Maduro, 53, says his foes are waging an “economic war” against him and seeking to foment a coup. Government officials say there is not enough time this year to organize a referendum.

Should there be such a vote in 2017 and Maduro loses, his vice president would take over – rather than a new presidential election being held – meaning the ruling “Chavismo” movement would still be in power.