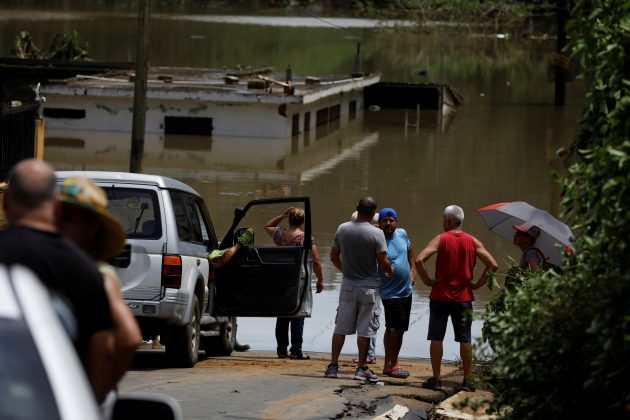 Local residents look at the flooded houses close to the dam of the Guajataca lake. REUTERS/Carlos Garcia Rawlins

SAN JUAN (Reuters) – Most people living near a crumbling dam in storm-battered Puerto Rico have been moved to safety, Governor Ricardo Rossello said on Monday, as he urged the U.S. Congress to fund an aid package to avert a humanitarian crisis after Hurricane Maria.

Most of the Caribbean island, a U.S. territory with a population of 3.4 million, is still without electricity five days after Maria swept ashore with ferocious winds and torrential rains, the most powerful hurricane to hit Puerto Rico for nearly a century.

There have been growing concerns for some 70,000 people who live in the river valley below the Guajataca Dam in the island’s northwest, where cracks were seen appearing on Friday in the 88-year-old earthen structure. 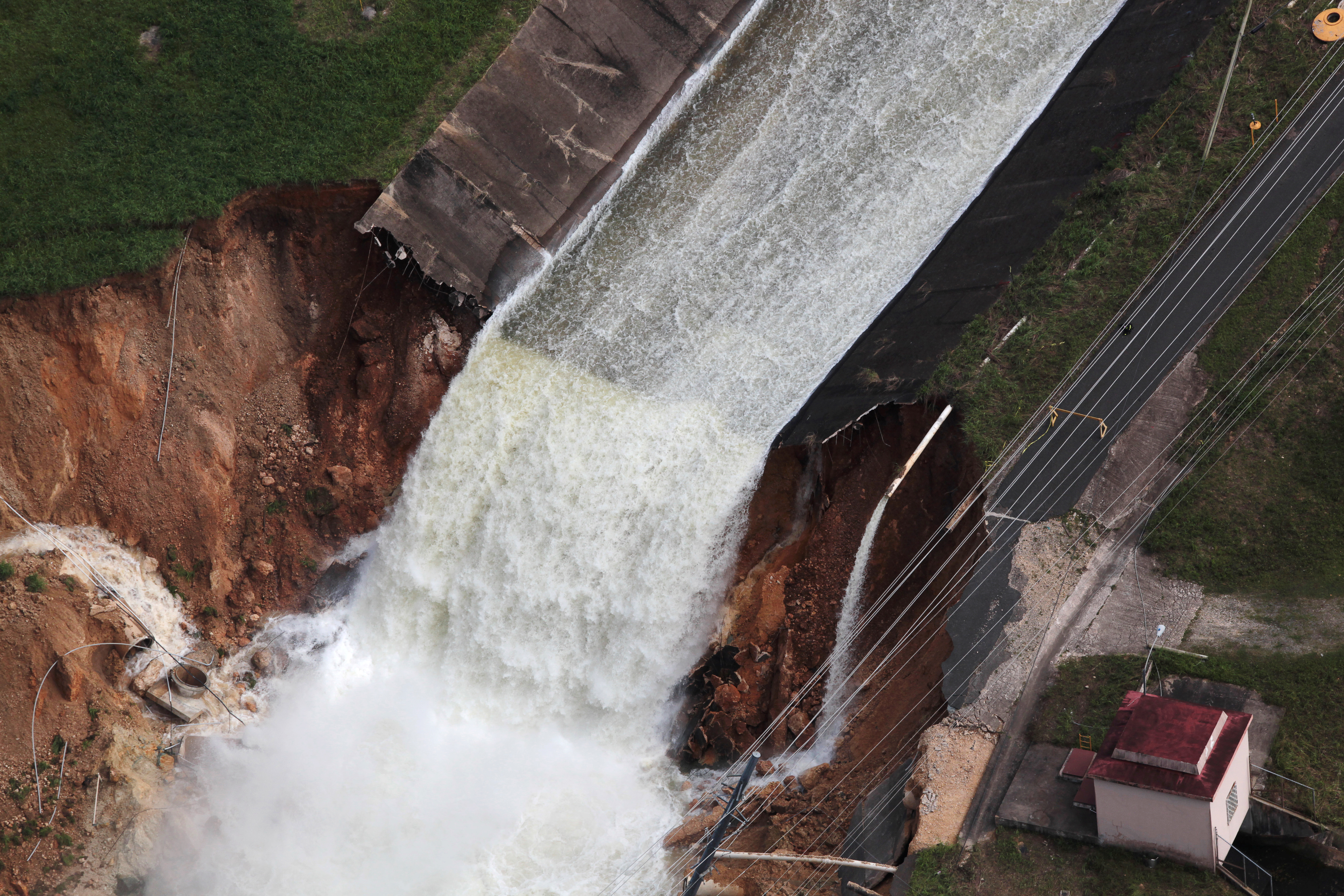 An aerial view shows the damage to the Guajataca dam. REUTERS/Alvin Baez

Rossello said he was working on the assumption that the dam would collapse. “I’d rather be wrong on that front than doing nothing and having that fail and costing people lives,” he said in an interview with CNN.

“Some of the dam has fallen apart and now we’re making sure that we can assess if the other part is going to fall down as well. … Most of the people in the near vicinity have evacuated.”

It was unclear if the governor was saying that most of the 70,000 valley inhabitants had left the area, or only the several hundred people living in the small towns closest to the dam. About 320 people from those towns have moved to safety, according to local media.

The fear of a potentially catastrophic dam break added to the difficulties facing disaster relief authorities after Maria, which was the second major hurricane to strike Caribbean this month and which killed at least 29 people in the region.

At least 10 of those who died were in Puerto Rico, including several people who drowned or were hit by flying debris, and three elderly sisters who died in a mudslide.

Many structures on the island, including hospitals, remain badly damaged and flooded. Clean drinking water is hard to find in some areas. Very few planes have been able to land or take off from damaged airports.

After Maria caused widespread flooding, the National Weather Service warned of further flash floods in some western parts of the island on Monday as thunderstorms moved in.

The hurricane hit at a time when Puerto Rico was already battling economic crisis. [nL2N1M31LR]

Rossello said on Monday that before the storms struck he had been embarking on an aggressive fiscal agenda that included more than $1.5 billion in cuts.

“This is a game changer,” the governor told CNN. “This is a completely different set of circumstances. This needs to be taken into consideration otherwise there will be a humanitarian crisis.”

“Our fellow citizens in Puerto Rico remain in our prayers as we make sure they have what they need,” Ryan said in a statement. 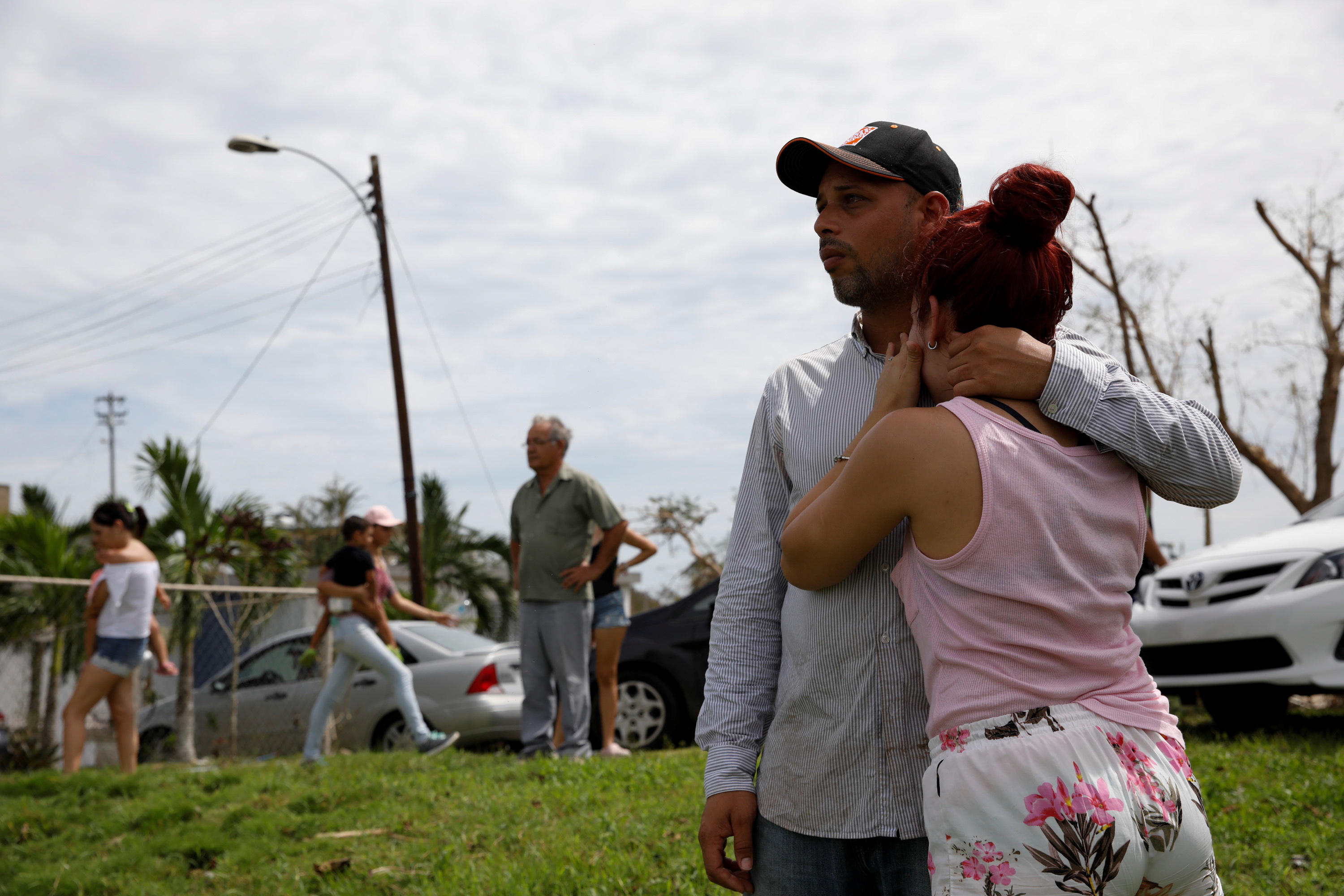 Local residents react while they look at the water flowing over the road at the dam of the Guajataca lake.
REUTERS/Carlos Garcia Rawlins

Maria continued to weaken and would likely be downgraded from a hurricane to a tropical storm by Tuesday night, the National Hurricane Center said. As of 11 a.m. ET (1500 GMT) on Monday, it was about 315 miles (505 km) south-southeast of Cape Hatteras, North Carolina, heading slowly north, the center said.

The storm was unlikely to hit the continental United States directly, but a tropical storm warning was in effect for much of the North Carolina coast. Officials issued a mandatory evacuation order for visitors to Ocracoke Island in the Outer Banks, beginning at 5 a.m. ET (0900 GMT) on Monday.

(Reporting by Dave Graham and Robin Respaut; Additional reporting by Jonathan Allen and Peter Szekely in New York and Doina Chiacu in Washington; Editing by Daniel Wallis and Frances Kerry)