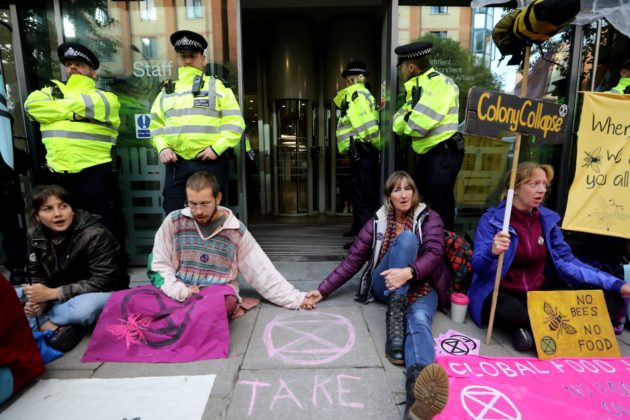 LONDON (Reuters) – London police have made nearly 500 arrests as climate-change protesters, labelled “uncooperative crusties” by Prime Minister Boris Johnson, continue two weeks of civil disobedience to push for more to be done to protect the environment.

The Extinction Rebellion group has been taking action in several countries including Britain, Germany, Austria, Australia, France and New Zealand as it lobbies politicians to go further in cutting carbon emissions.

The protests are the latest stage in a global campaign for tougher and swifter steps against climate change coordinated by the group, which rose to prominence in April when it snarled traffic in central London for 11 days.

Police said 152 arrests had been made on Tuesday, taking the total number over the two days to 471 as some protesters lay down in the road outside parliament whilst others dressed in colourful costumes or brought tree saplings to give to lawmakers.

Police have introduced stricter conditions, saying anyone wanting to continue the protest can only do so in Trafalgar Square.

“This action is necessary in order to prevent the demonstrations from causing serious disruption to the community,” police said. “Anyone who fails to comply with the condition is liable to arrest and prosecution.”

Prime Minister Boris Johnson criticised the protesters when he attended an event late on Monday.

“I am afraid the security people didn’t want me to come along tonight because they said the road was full of uncooperative crusties,” he said, using a slang term for eco-protesters.

“They said there was some risk that I would be egged,” he added.

On Tuesday, some protesters hit back at him.

“We’re just ordinary people trying to express our deep disappointment with how slow the process of getting climate change action to occur is taking place, with the government not really listening, not really taking it forward on the scale it needs to be taken.”

The group wants Britain to reduce greenhouse gas emissions to net zero by 2025 rather than the government’s 2050 target.