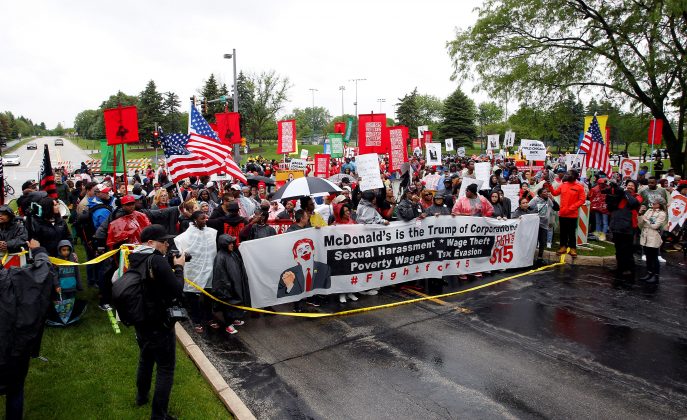 Cooks, cashiers and other minimum wage earners join anti-Trump activists on a march for an increase in the minimum wage to $15/hour during a “March on McDonald’s” in Oak Brook, Illinois, U.S., May 24, 2017. REUTERS/Frank Polich

The demonstrators were part of a nationwide protest organized by “Fight for 15,” a labor group that has regularly targeted McDonald’s in calls for higher pay and union rights for workers.

“I saw my mother, who worked 30 years for Hardee’s, struggle on food stamps to raise her family and now I’m doing the same thing,” said Terrance Wise, a 42-year-old from Kansas City, protesting outside the McDonald’s meeting in a Chicago suburb.

Wise, who has worked at McDonald’s for three years, said he earns $7.65 an hour working full time. He said he also relies on food stamps to support his three daughters.

“Instead of paying their CEO $15 million, they should give him $10 million and pay their workers what’s right,” he said. The main demand of “The Fight for 15” is a minimum wage of $15 an hour.

Shareholders inside the McDonald’s meeting did not ask about the protests during a question-and-answer session.

Easterbrook focused on the fast-food giant’s plans for delivering food with UberEats and the rollout of new products.

The company says it invests in its workers by helping them to earn college degrees and acquire on-the-job skills. In 2015, the company raised the average hourly pay to around $10 for workers in the restaurants it owns.

However, most McDonald’s workers in the United States are employed by franchisees who set their own wages.

Hopes for an increase in the $7.25-per-hour federal minimum wage were dashed last year when Republicans retained control of Congress in the U.S. elections last November. Opponents of an increase say higher costs would force restaurants to cut hiring, and some businesses would not survive.

Still, voters in Arizona, Colorado, Maine and Washington have approved minimum wage increases in their states, encouraging advocates to continue pressing their case at the local level. Workers on Wednesday also gathered outside of a McDonald’s store near downtown Los Angeles.

In Chicago, 30 protesters outside the United Continental meeting were arrested and cited for blocking a road, Chicago police said.

More than 100 protesters were arrested during nationwide demonstrations several weeks after Donald Trump won the White House in November. At various times on the campaign trail, Trump suggested U.S. workers were overpaid, but also that the minimum wage should be raised.