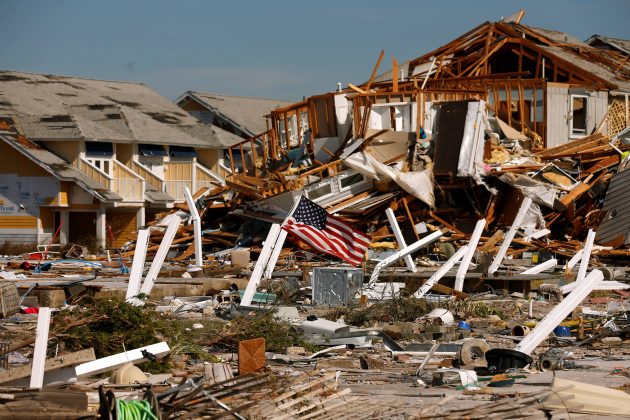 MEXICO BEACH, Fla. (Reuters) – Hurricane Michael’s violence was visible on Thursday in shattered Florida coastal towns, where rows of homes were ripped from foundations and roofs were peeled off schools by the near-record-force storm blamed for six deaths.

Michael smashed into Florida’s northwest coast near the small town of Mexico Beach on Wednesday with screeching 155 mile per hour (250 kilometer per hour) winds, pushing a wall of seawater inland.

“The wind was really tearing us apart. It was so scary you’d poo yourself,” said retiree Tom Garcia, 60, who was trapped inside his Mexico Beach home as water poured in to waist height.

He and his partner Cheri Papineau, 50, pushed on their door for an hour in an effort to stop the storm surge bursting in as their four dogs sat on top of a bed floating through their home.

Video shot by CNN from a helicopter showed homes closest to the water in Mexico Beach had lost all but their foundations. A few blocks inland, about half the homes were reduced to piles of wood and siding and those still standing had suffered heavy damage.

Michael, the third most powerful hurricane ever to hit the U.S. mainland, weakened overnight to a tropical storm and pushed northeast on Thursday, bringing drenching rains to Georgia and the Carolinas, which are still recovering from Hurricane Florence last month. 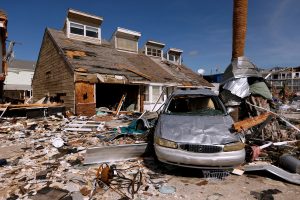 The injured in Florida were taken to hospitals in Tallahassee, with some hurt after the storm by breaking tree limbs and falls, said Allison Castillo, director of emergency services at the city’s Capital Regional Medical Center.

Brock Long, head of the Federal Emergency Management Agency, called Mexico Beach, which has a population of about 1,200, “ground zero” for the hurricane damage.

In Panama City, 20 miles (32 km) northwest of Mexico Beach, buildings were crushed and boats were scattered around. Michael left a trail of utility wires on roads, flattened tall pine trees and knocked a steeple from a church.

Al Hancock, 45, who works on a tour boat, survived in Panama City with his wife and dog.

“The roof fell in but we lived through it,” he said.

Nearly 950,000 homes and businesses were without power in Florida, Alabama, the Carolinas and Georgia on Thursday.

Florida Governor Rick Scott told the Weather Channel the damage from Panama City down to Mexico Beach was “way worse than anybody ever anticipated.”

At Jinks Middle School in Panama City, the storm tore off part of the gym roof and one wall, leaving the wooden floor covered in water. A year ago the school welcomed students and families displaced by Hurricane Maria in Puerto Rico. 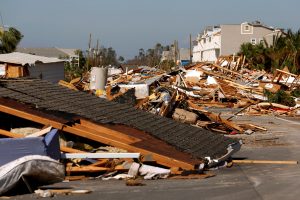 “The kids live nearby. The second floor of some apartments are just gone. Roofs are gone,” Principal Britt Smith told CNN after talking by phone with some of those who did not evacuate.

Michael, a Category 4 storm on the five-step Saffir-Simpson hurricane intensity scale when it came ashore, was causing flash flooding on Thursday in parts of North Carolina and Virginia, where some areas could get as much as 9 inches (23 cm) of rain, the National Hurricane Center (NHC) said.

The number of people in emergency shelters was expected to swell to 20,000 across five states by Friday, said Brad Kieserman of the American Red Cross.

Michael pummeled communities across the Panhandle and turned streets into roof-high waterways.

“Our biggest thing is the downed lines and the downed trees and now this water main issue,” said Apalachicola Mayor Van Johnson, referring to a burst water main complicating efforts to restore power.

Michael also disrupted energy operations in the U.S. Gulf of Mexico as it approached land, cutting crude oil production by more than 40 percent and natural gas output by nearly one-third as offshore platforms were evacuated.

With a low barometric pressure recorded at 919 millibars, a measure of a hurricane’s force, Michael was the third strongest storm on record to hit the continental United States, behind only Hurricane Camille on the Mississippi Gulf Coast in 1969 and the Labor Day hurricane of 1935 in the Florida Keys.