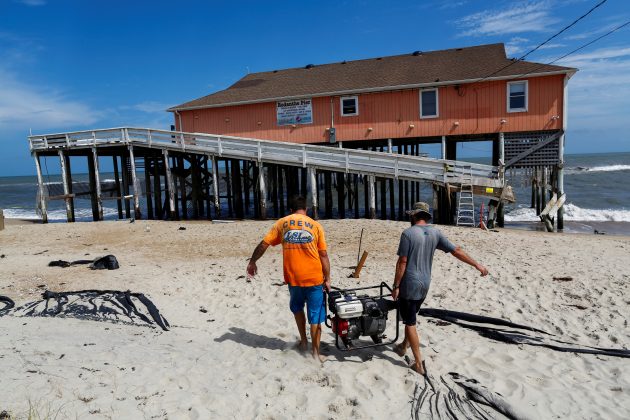 People work in the reconstruction of Rodanthe pier after being partially damaged after the pass of Hurricane Florence, now downgraded to a tropical depression in Rodanthe, North Carolina, U.S., September 18, 2018. REUTERS/Eduardo Munoz

RODANTHE, N.C. (Reuters) – When Florence was raging last Friday on North Carolina’s Outer Banks, the hurricane tore a 40-foot (12-meter) chunk from a fishing pier that juts into the ocean at the state’s most popular tourist destination.

The privately owned Rodanthe pier has already undergone half a million dollars in renovation in seven years and the owners started a new round of repairs this week.

“The maintenance and upkeep on a wooden fishing pier is tremendous,” said co-owner Terry Plumblee. “We get the brunt of the rough water here.”

Scientists have warned such rebuilding efforts are futile as sea levels rise and storms chew away the coastline but protests from developers and the tourism industry have led North Carolina to pass laws that disregard the predictions.

The Outer Banks, a string of narrow barrier islands where Rodanthe is situated, may have been spared the worst of Florence, which flooded roads, smashed homes and killed at least 36 people across the eastern seaboard.

Still, the storm showed North Carolinians on this long spindly finger of land that ignoring the forces of nature to cling to their homes and the coast’s $2.4 billion economy may not be sustainable.

Some have called for halting oceanside development altogether.

In a government study published in 2010, scientists warned that sea levels could rise 39 inches by 2100

Higher sea level will cause more flooding and render some communities uninhabitable, as well as affect the ocean vegetation, jeopardize the dune systems that help stabilize the barrier islands, and cause more intense erosion when storms like Florence make landfall, scientists said.

Developers said the study was too theoretical to dictate policy.

Some argue policymakers do not need a 90-year projection to know something needs to change.

“When we have a hurricane, that shows everybody where their vulnerabilities are today, forget 100 years from now, but right now,” said Rob Young, a geologist at Western Carolina University who co-authored the study by the state’s Coastal Resources Commission (CRC).

Young said he would like to see development move back from the ocean’s edge and laments that homeowners and developers rebuild almost any structure damaged or destroyed by a bad storm.

But the idea of retreating is a tough sell for the people who live there and have invested in property.

“You’re asking us to say, ‘Hey, 4,000 or 5,000 people on little Hatteras Island, it’s time for you to pack up and move,’ and that’s not a reasonable expectation,” said Bobby Outten, manager for Dare County on the Outer Banks.

Opponents of using the CRC study to set policy said that most Outer Bank homeowners recognize the risks.

“If you’re buying on the coast, anyone that buys in an area surrounded by water, you’re always taking a risk that you’re going to have storm damage,” said Willo Kelly, who has worked in real estate for more than a decade.

Even though she acknowledges that sea levels are rising, Kelly is also among those who opposed making state policy decisions, including anything affecting home insurance or property values, based on the study’s dire 90-year forecast of sea-level rise.

The CRC released a second report in 2015 predicting sea level rise over a 30-year period, instead of 90 years. The new report was praised by developers as being more realistic and said sea levels would rise 1.9 to 10.6 inches. (https://bit.ly/2xyGDVr)

The 2012 law was welcomed by the development community and panned by scientists whose warnings, they felt, were going unheeded. Members of the legislature who sponsored the bill did not return requests for comment.

After this year’s storm demolished the sandy protective berms that stand between the water and the main coastal road, the state sent backhoes to rebuild them and officials to assess damage to bridges and roads.

“There’s also a sense of denial,” said Gavin Smith, director of the University of North Carolina’s Coastal Resilience Center, adding that with rising seas and more intense storms it will be more costly and more difficult to replace infrastructure.

Rodanthe Pier was lucky this time, sustaining only moderate damage, said Clive Thompson, 58, who works at the pier. In the past, nor’easters have ripped its end from the ground and tore pilings from sand.

The beach was not so lucky. The ocean ate away about 50 meters of what used to be dry sand above the high-tide line, he said.

“It’s a waste of man-hours, time and money, having to do this over and over,” he said. “One day I hope people understand the power of water. … It don’t play.”