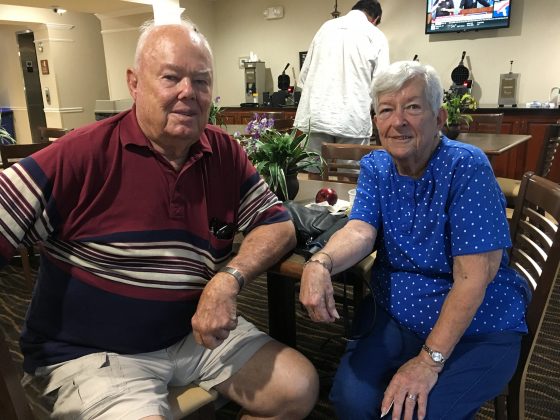 JW and Helen Neal sit in a hotel one mile from their beachfront house due to Hurricane Michael, in Panama City, Florida, U.S., October 10, 2018. REUTERS/Rod Nickel

PANAMA CITY BEACH, Fla. (Reuters) – Andrew Lamonica, 64, a retired power company worker and lifelong Panama City Beach resident, ignored orders to evacuate ahead of Michael, one of the strongest hurricanes ever to hit the United States and waited out the storm in his rented bungalow.

With a mighty crack, a tall pine crashed onto his house, drenching the interior as rain leaked through the shattered roof. Two other trees on his property came down, but his 2011 Cadillac – “my baby” – survived without a scratch.

“I’ve lived here all my life and the storm brought things I’ve never seen,” Lamonica said. “There were several times I thought maybe I should have left.”

Lamonica was lucky. In the first fatality related to Wednesday’s arrival of Hurricane Michael, local authorities reported a “male subject” was killed by a tree toppling onto his house in the Tallahassee area.

Michael inflicted damage to Panama City unevenly, impaling some businesses with sign poles while leaving others virtually unscathed. By nightfall, the city was under curfew, darkened without power, its streets littered with downed power lines, fallen trees and debris.

Joey Morrison, a 30-year-old glass worker, said Michael beat so hard on his apartment door in Panama City Beach with its 155 mile-per-hour (250 km-per-hour) winds that he had to reinforce it by drilling in screws – and still had to sit against the door to keep it shut.

“I got scared enough that I was thinking, ‘I should have left.’ Because this isn’t like anything that ever happened here,” Morrison recounted.

Some of those who did evacuate from Panama City Beach were no less terrified.

“My God, it’s scary. I didn’t expect all this,” said Bill Manning, 63, a grocery store clerk who left his camper in Panama City to move into a hotel.

He watched through a window as trees and poles swayed.

“Panama City, I don’t know if there will be much left,” Manning said.

Michael crashed ashore at Mexico Beach, about 20 miles (30 km) east of Panama City, as a Category 4 storm before charging inland across the Southeast. Its rapid intensification in the warm waters of the Gulf took many by surprise. As recently as the weekend, Michael was expected to hit the Panhandle as a tropical storm.

Mandatory evacuation orders were largely heeded by the 50,000 residents of Panama City Beach and Panama City, a pair of towns dotted with attractions designed like shipwrecks and volcanoes to amuse the thousands of tourists who flock there during the warm months.

Bill Bryant, a Navy veteran, moved his family into one of the few hotels that remained open.

“The smart thing would have been to evacuate farther inland,” said Bryant, 48.

All but a few businesses had closed and were boarded up by Tuesday evening, leaving streets empty. Even the local Waffle House restaurant was shuttered. The diner chain is famous for its 24-hour service 365 days a year and the “Waffle House Index” – whether it is open or closed – has become an indicator to gauge the severity of a disaster.