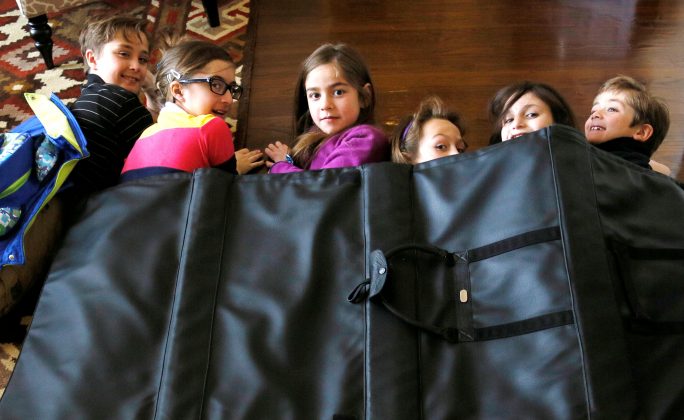 FILE PHOTO: Children demonstrate how they might take shelter in a school under a bulletproof blanket sold by Elite Sterling Security LLC (ESS) in Aurora, Colorado March 19, 2013. REUTERS/Rick Wilking/File Photo

(Reuters) – From gunshot detection devices to wireless panic buttons and bulletproof windows, schools across the United States are pursuing aggressive security measures to prevent a shooting massacre on their campuses.

Pressure from parents and community members to find solutions, both high and low tech, has grown in the wake of deadly mass shootings at high schools in Parkland, Florida, and Santa Fe, Texas, among other violent incidents.

In the rush to find answers, school security has ballooned into a multibillion-dollar industry. Meanwhile, some schools are spending precious funds on untested technologies, safety experts said, even though the most robust and effective safety measures can only mitigate the risk, not eliminate it.

“We’ve seen this huge shift to unproven tactics, based on a lot of emotion,” said Chris Dorn, an analyst with Safe Havens International, which conducts on-site safety assessments at hundreds of schools every year. “What we really need to do is to get back to basics.”

Those include single-point entry that restricts access to buildings, classrooms that lock from the inside, training in emergency protocols and effective supervision of campuses by either police officers or school staff.

School officials must also strive to balance the need for security with a desire to preserve an atmosphere conducive to learning, experts said, warning that schools can become fortified bunkers that feel like prisons to students.

“There’s a diminishing amount of returns,” Dorn said, noting that even extraordinarily secure places like the Pentagon and the Fort Hood military base have faced shootings.

Metal detectors, for example, are expensive, require armed personnel and can create long lines outside buildings, providing yet another target for potential attackers.

Many schools have considered door-barricading devices, but experts said they can endanger students by preventing escape and stopping law enforcement from accessing rooms. Instead, schools should ensure their classrooms can be locked from the inside.

Even cameras are not necessarily helpful during an active shooter situation unless they are monitored live at all times, requiring additional personnel.

The majority of schools now have single-point entries, forcing visitors during the day to come through one entrance and get approved by a main office, a practice that security experts say is among the most effective. Many districts, like Littleton, Colorado, near the site of the 1999 Columbine High School massacre, have installed video intercom systems to restrict assess.

But most schools use multiple points of entry at arrival and dismissal due to the sheer number of students. In Parkland, perimeter gates were opened shortly before the end of the day.

Some schools, like Healdton Public School in Oklahoma, have installed expensive bulletproof shelters in classrooms that can shield students from incoming fire.

Even low-budget solutions, like providing classrooms with makeshift weapons – one Pennsylvania school district put buckets of rocks in all of its 200 classrooms – can have unexpected drawbacks if they are used in student assaults.

Beyond physical protections, schools have increasingly used threat assessment teams, which seek to identify troubled students and intervene before any violence can occur. The teams consist of school officials, mental health professionals and law enforcement.

“The people who plan these will typically tell you if there’s planning to do something violent or not,” said Marisa Randazzo, the former chief research psychologist at the U.S. Secret Service and co-author of a landmark study following Columbine that established the standards for school threat assessments.

Maryland and Florida recently passed laws requiring that all schools adopt threat assessment models in the wake of school shootings, joining Virginia as the only states to mandate the practice, Randazzo said.

“Before you connect the dots, you have to collect the dots,” said Gary Sigrist of Safeguard Risk Solutions, which provides security consulting to schools.

But experts in security say even the best safety measures have their limits. A determined shooter will usually find a way to inflict damage, especially in cases such as the Texas incident in which the suspect is a student authorized to be on campus.

“If there’s any one lesson we’ve learned, there is no 100 percent foolproof method to prevent these acts of violence,” said Ronald Stephens, who runs the National School Safety Center, a group that offers training and on-site technical assistance to schools.