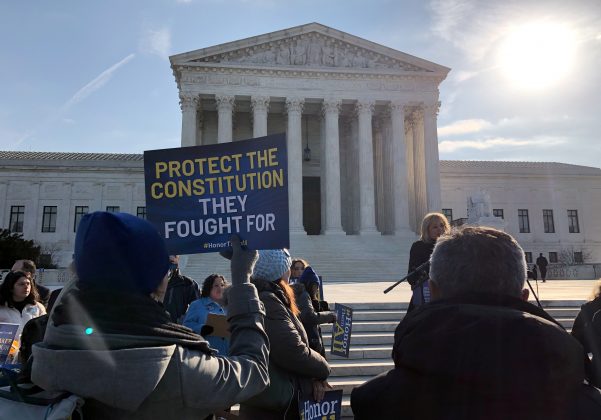 Advocates for the separation of church and state participate in a rally outside the U.S. Supreme Court ahead of oral arguments over whether a concrete cross commemorating servicemen killed in World War One in Bladensburg, Maryland, is an unconstitutional government endorsement of religion, in Washington, U.S., February 27, 2019. REUTERS/Lawrence Hurley

WASHINGTON (Reuters) – The conservative-majority U.S. Supreme Court on Wednesday takes up one of the biggest cases of its current term when it weighs whether a cross-shaped war memorial on public land in Maryland is an unconstitutional government endorsement of religion.

The so-called Peace Cross, a 40-foot-tall (12 meters) concrete memorial to 49 men from Maryland’s Prince George’s County killed in World War One, is situated on public land at a busy road intersection in Bladensburg just outside Washington.

Fred Edwords and two other plaintiffs filed a 2014 lawsuit challenging the cross as a violation of the U.S. Constitution’s Establishment Clause, which prohibits the government from establishing an official religion and bars governmental actions favoring one religion over another.

Edwords, who is retired, is a long-time member and previous employee of the American Humanist Association, which advocates for the separation of church and state.

Supporters of the group participated in a small rally in front of the court before the arguments, with some holding signs saying, “Protect the Constitution they fought for,” in reference to military veterans. Supporters of the cross, including members of the American Legion, a private veterans’ group, also gathered outside the building.

The cross was funded privately and built in 1925. The property where it stands was in private hands when it was erected, but it is now on land owned by the Maryland-National Capital Park and Planning Commission, a governmental agency.

The nine justices on the high court, which has a 5-4 conservative majority, are due to hear a 70-minute oral argument, with a ruling due by the end of June.

The Establishment Clause’s scope is contested, so comments by the justices suggesting a willingness to allow greater government involvement in religious expression will be closely scrutinized.

The cross has the backing of President Donald Trump’s administration and members of the American Legion, who hold memorial events at the site. Veterans and their relatives have said the monument has no religious meaning despite being in the shape of a Christian cross, calling the lawsuit misguided and hurtful.

Aside from its shape, the cross has no other religious themes or imagery.

The Richmond-based 4th U.S. Circuit Court of Appeals ruled that the cross was unconstitutional, reversing a Maryland-based federal judge’s decision allowing the monument.

The Supreme Court will hear appeals by the park commission and the American Legion, which is represented by the conservative religious rights group First Liberty Institute.

The Supreme Court has sent mixed messages about parameters for government-approved religious expression, including in two rulings issued on the same day in 2005.

In one, it ruled that a monument on the grounds of the Texas state capitol building depicting the biblical Ten Commandments did not violate the Constitution. But in the other, it decided that Ten Commandments displays in Kentucky courthouses and schools were unlawful.