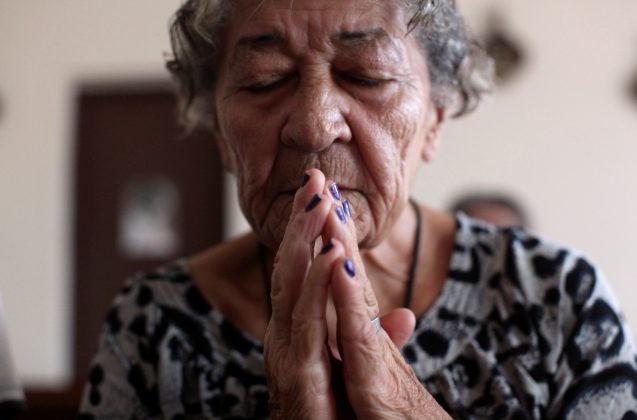 His wife, Zoraida Reyes, 77, struggles to keep the house stocked with fresh food without a refrigerator. At night, she fans her husband so he can sleep.

With another hurricane season starting, older Puerto Ricans have little to protect them from another storm on an impoverished island that remains far from fully recovered. Younger and wealthier people have been moving away for years, leaving an older and sicker population in the hands of an underfunded healthcare system. Tens of thousands more have fled since Maria.

“We wish we could move, at least for the time he has left,” Reyes said of her husband.

Senior citizens make up a larger share of the population here than in all but four U.S. states, according to federal Census data. About half are disabled, more than any state.

Yet the island has just six nursing homes – with a total of 159 beds – that are certified by the U.S. Centers for Medicare and Medicaid (CMS) to provide rehabilitative services.

Puerto Rico relies instead on a patchwork of about 800 nursing homes licensed by the island’s Department of Family. They are typically private businesses or nonprofit organizations that care for small numbers of elderly people with limited services – and limited budgets, strained further since Maria.

A fragile healthcare system is hardly the only problem that leaves the elderly here – and all Puerto Ricans – vulnerable to another catastrophic storm.

About 7,000 houses and businesses still lack power, after Maria leveled a grid that was ill-maintained before the storm. Power utility PREPA has patched together most of the system but remains years away from making the fundamental improvements needed to enable it to withstand another hurricane.

“The grid needs to be rebuilt – not just the lines,” PREPA Chief Executive Walter Higgins said.

“God help us, but we definitely can’t handle any more hurricanes,” said Tania Vazquez, the island’s secretary of natural resources.

Governor Ricardo Rossello’s office declined to comment on the island’s hurricane preparedness or on specific efforts to protect the elderly, referring questions to other agencies.

Glorimar Andujar, Secretary of the Department of Family, said officials learned a lot from Maria about how to prepare for the next storm.

“The emergency plans are much better,” Andujar said, “because we now have an experience that no other generation of agency leaders have experienced.”

The home barely broke even before Maria, relying on resident fees of between $2,000 and $3,000 a month. Since then, two of 11 residents moved to the mainland, and insurance has so far not paid for about $40,000 in storm damage, Iturrizaga said. The business carries $500,000 in debt, has fallen behind on loan and tax payments and now loses up to $5,000 a month.

“I don’t know what’s kept me going,” Iturrizaga said. “I love doing this, but I’m looking at other things to do with the land.”

Another private home, the nonprofit Asilo San Rafael in Arecibo, theoretically charges residents $1,200 a month; in reality, only three of 27 residents pay full price, and at least nine pay nothing, said board member Lucila Oliver.

Operating costs run about $700,000 annually, with about $110,000 coming from a handful of subsidies from the island’s central government – subsidies she says have declined sharply in recent years as the now-bankrupt Puerto Rican government fell into a fiscal crisis, Oliver said.

The Department of Family’s Andujar disputed that the subsidies have declined, but Oliver provided Reuters with balance sheets showing a drop in department funding to $59,000 this fiscal year from $80,000 last year.

Maria brought new costs: about $1,200 a month to bring in water tanks, and thousands more on diesel for generators. Oliver said San Rafael is “used to living on the edge,” but says the edge has drawn closer since the hurricanes.

Many elderly and disabled here find a way to get by at home, with little care. Some seek help from the Department of Family, applying for a caregiver to come by just a day or two a week, said Andujar.

Many are turned away, she said.

“The funding is very limited,” she said, “and the need is very big.”

PREPARING FOR ANOTHER HIT

This hurricane season, the department is making sure it has accurate locations for all licensed nursing homes after cell phone service disruptions stymied the response to Hurricane Maria. The homes, Andujar said, are now required to have 30 days of food on hand, and the department has also requested they have generators and water tanks.

She added that about 315,000 elderly people currently receive benefits as part of a $1.27 billion federal allocation under the Nutritional Assistance Program.

The U.S. Federal Emergency Management Agency (FEMA) remains on the island and said it has given municipalities money to improve community resilience.

Dr. Carmen Sanchez Salgado, Puerto Rico’s ombudsmen for the elderly, said her staff has been educating elderly people about the emergency supplies they need.

Charities and nonprofits have also helped. The nonprofit PRxPR, created in response to Maria, is funding solar panels for elderly people and community centers.

One such center in Naguabo had no power as recently as four weeks ago, said Carmen Baez, the group’s co-founder.

“Our installation was it,” she said.