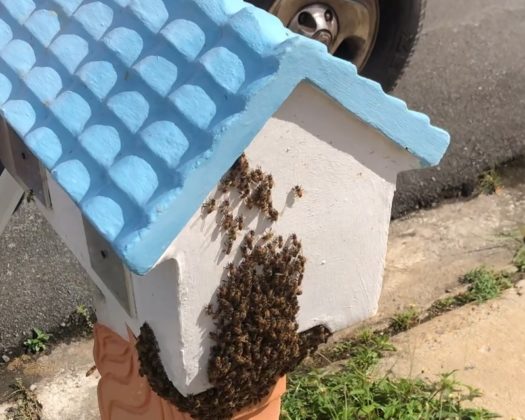 Bees which abandoned their hives after becoming disorientated by over two weeks of earthquakes and tremors swarm on a mail box in a residential street in Fajardo, Puero Rico January 12, 2020 in a still image from video. Video taken January 12, 2020. Courtesy of Hermes Conde via REUTERS

(Reuters) – Puerto Rican bees are abandoning hives as weeks of earthquakes disrupt colonies, experts said, raising concerns that a subspecies seen as a possible solution to the global bee crisis could take another hit after being decimated by hurricanes in 2017.

Bees have deserted up to 25% of hives in towns like Guayanilla in southern Puerto Rico after hundreds of tremors and a 6.4 magnitude earthquake rattled the area, said Hermes Conde, director of the island’s Eastern Apiculture School. The quakes have shifted the position of many hives, confused returning bees and caused destruction inside the wooden boxes, he said.

They have also disrupted beekeepers’ normal feeding of hives during winter months as farmers recover from quakes that collapsed hundreds of homes and caused at least one death. Thousands of Puerto Ricans are sleeping outdoors, fearful their houses could collapse in another big aftershock.

As the U.S. territory seeks a disaster declaration from President Donald Trump to increase relief resources, the island’s beekeepers are appealing for U.S. donations of “protein patties” and other bee food to save their hives.

“Bees are looking for calmer areas, fleeing all the movement in the earthquake zone,” said Conde, who has lost 10 of his 50 hives in Guayanilla and fears more may go if quakes continue.

Puerto Rico’s hardy, productive bees are the descendants of Africanized bees. They are seen as a possible substitute for western honey bees that have died off in unprecedented numbers due to so-called colony collapse disorder (CCD).

Scientists say Puerto Rico’s bees are less susceptible to parasites blamed for CCD, a phenomenon which has caused economic losses worldwide in crops that depend on western honey bees for pollination.

Around 85% of Puerto Rico’s bees were wiped out by Hurricane Maria in 2017, which killed about 3,000 people on the Caribbean island. The bee population has since recovered to around 60% of its former size, according to Conde.

Bee expert Tugrul Giray, a professor at the University of Puerto Rico, said the principal reason bees were abandoning hives was likely a lack of food as beekeepers tended to other priorities in their lives.

But he said bees hated vibration, and the repeated tremors and earthquakes since Dec. 28 had caused them to become less docile and leave nests.