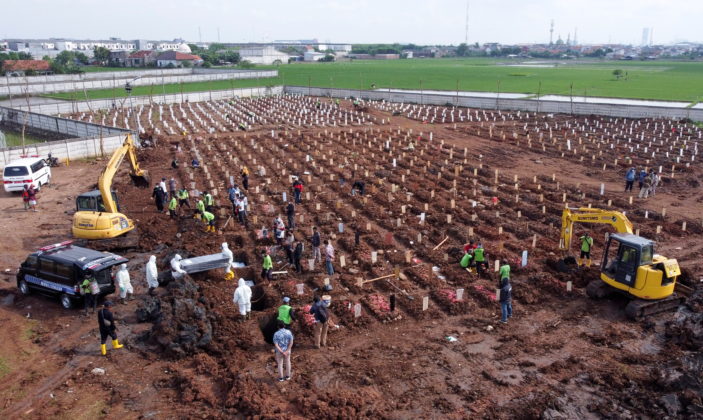 FILE PHOTO: Municipality workers wearing personal protective equipment (PPE) carry a coffin from an ambulance to the burial area provided by the government for victims of the coronavirus disease (COVID-19) in Jakarta, Indonesia, June 24, 2021. Picture taken with a drone. REUTERS/Willy Kurniawan/File Photo

By Tom Allard and Kate Lamb

JAKARTA (Reuters) -Indonesia’s health minister is leading a push for stricter controls as coronavirus cases surge to unprecedented levels, according to sources familiar with government discussions. Coronavirus infections in Indonesia have tripled in the past three weeks, overwhelming hospitals in the capital Jakarta and on the heavily populated island of Java.

On Monday, Indonesia recorded 20,694 new infections, bringing the weekly total to 131,553. Three sources, who spoke on condition of anonymity, told Reuters that health minister Budi Gunadi Sadikin had urged government leaders to enact tougher social restriction measures but his request was overruled. He is continuing to push his case, they said. One of the sources, who declined to be named as they were not authorized to speak on the matter, said government meetings on the issue would take place this week. The health minister’s position was supported by the country’s tourism minister Sandiaga Uno, who confirmed to Reuters that a tougher lockdown was under active consideration. “I am encouraging a tougher lockdown (but) we would need to provide the basic necessities for the people,” he said. “If the number of cases is increasing, then we need to adjust very quickly. “Citing the need to safeguard Southeast Asia’s biggest economy, Indonesia has mostly rejected the lockdowns imposed by its neighbors and large developing countries like India.

Instead, Jakarta has opted for social restrictions targeting villages and neighborhoods deemed “red zones” due to high infections, a policy known as PPKM Mikro. Last week, the head of the country’s COVID-19 taskforce, coordinating economy minister Airlangga Hartarto, banned religious activities at houses of worship, closed schools and bars and required offices, restaurants, cafes and malls to operate at 25% capacity in red zones for two weeks. When Reuters enquired if the health minister wanted greater curbs on social mobility, a ministry spokesperson replied “in accordance with the current policy”. A spokesman for the president said: “Until now, we still have PPKM Mikro, empirically it is still very effective to control small areas.”

The Indonesian Medical Association (IDI) on Sunday called on the government to implement large-scale restrictions, especially across the island of Java, home to more than half the country’s population of 270 million people. The IDI said that 24 regencies and cities had reported isolation bed capacity at 90% full, while intensive care units in several areas were nearing 100% capacity and 30 doctors had died in June from COVID-19. “If there is no firm intervention we will be like India,” said Dr. Adib Khumaidi, head of the IDI’s mitigation team, noting the surge in cases in the South Asian nation in April and May and the “collapse” of its healthcare system. Public health experts have warned the government’s current policy for social restrictions can’t be fully implemented by poorly resourced local officials and don’t account for people moving between red zones and other areas. How villages and neighborhoods are designated red zones is opaque and undermined by low rates of testing and contact tracing that masks the true extent of Indonesia’s overall infection rate, they said. One source said that, among several options, presidential advisers were examining the lockdowns in India, where a fivefold increase in infections in little over a month was fully reversed in a similar time frame. If guidelines followed by Indian states were adopted in Indonesia, lockdowns would be introduced in 31 of its 34 provinces where positivity rates are at 10 per cent or higher. Adjusting for population size, Indonesia has about 40% of the intensive care beds in India, according to a study last year by Princeton University. On Friday, the health minister announced plans for 7,000 more hospital beds in Jakarta dedicated to COVID-19 patients. Uno said at least 15 hotels close to hospitals with up to 2,000 beds also have been identified as places where patients with milder symptoms could be treated. Meanwhile, Indonesia’s food and drug agency on Monday approved the COVID-19 vaccine made by China’s Sinovac Biotech for children aged 12-17.

(Reporting by Tom Allard in Jakarta and Kate Lamb in Sydney; Additional reporting in Jakarta by Agustinus Beo Da Costa and Stanley Widianto; Editing by Shri Navaratnam and Bernadette Baum)