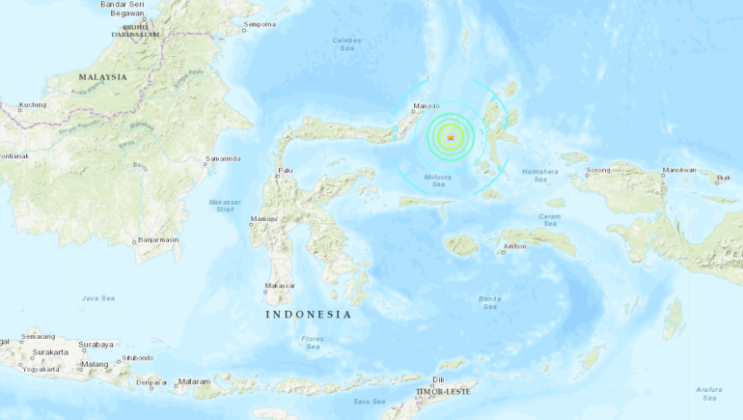 Indonesia issues tsunami alert after powerful quake causes panic
JAKARTA (Reuters) – Indonesia issued a tsunami alert on Thursday after a powerful earthquake struck in the sea near the Moluccas, prompting panicked islanders to flee to higher ground, according to residents and a media report.

The quake had a magnitude of 7.1 and struck 139 km (86 miles) northwest of the city of Ternate at a depth of 45 km, according to the U.S. Geological Survey. Earlier, the agency put the magnitude at 7.4.

“Most likely it (a tsunami) won’t hit the land, but we still need to be on alert,” Rahmat Triyono, an official at Indonesia’s geophysics agency, told Kompas TV. He said there had been no reports of damage so far.

The quake was also felt strongly on the island of Sulawesi, to the west of the epicenter.

Indah Lengkong, a resident of port city of Bitung in North Sulawesi, said by text message: “The house was visibly shaking.”

People in her neighborhood had initially panicked, she said, adding: “The quake was very strong and lasted for a while. We can still feel tremors but weaker.”

“The earth was literally shaking so hard,” she said.

Metro TV said some residents had fled to higher ground in the North Moluccas.