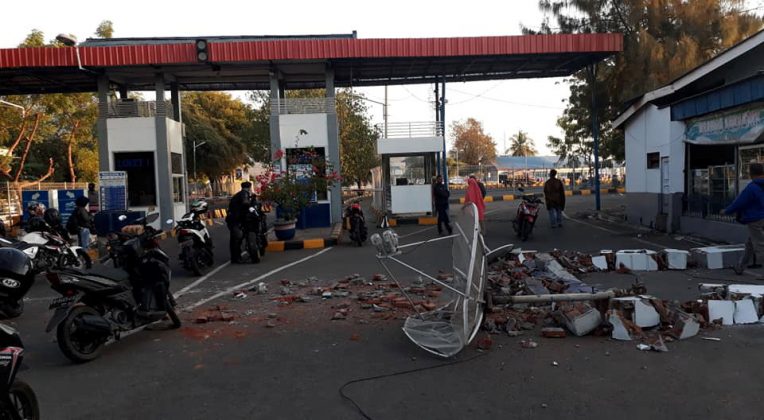 Debris is seen on a road at Kayangan Port, after an earthquake hit Lombok, Indonesia, August 20, 2018, in this picture obtained from social media. Bayu Wiguna/via REUTERS

MATARAM, Indonesia (Reuters) – At least 10 people were killed by strong tremors that rocked Indonesia’s holiday island of Lombok on Sunday, authorities said following the latest in a series of earthquakes that killed hundreds and forced thousands to flee their homes in recent weeks.

Nearly 500 people have died in quakes and aftershocks since July 29 across the northern coast of the island, which lies just east of Indonesia’s top tourist destination, Bali.

Sutopo Purwo Nugroho, a spokesman at the national disaster mitigation agency, said on Monday relief and reconstruction efforts had been “intensified”.

“The rebuilding of public facilities like hospitals and schools is being speeded up,” he said.

He said more than 100 aftershocks had been recorded since Sunday night’s magnitude 6.9 quake, which sent panicked residents into the streets and cut power and communication lines across the island.

Aftershocks ranging between magnitude 4 and 5 were continuing on Monday morning and access to some areas had been cut off by landslides triggered by the tremors, according to officials in Mataram, Lombok’s main city.

Sunday’s quake came exactly a fortnight after another 6.9 magnitude earthquake which killed around 460 people and prompted massive search, rescue and relief efforts.

Hundreds of thousands of residents have been left homeless and are camped out in open fields, refusing to shelter indoors due to continuing tremors.

Aid organizations like Save The Children said they were “ready to scale up their humanitarian response”.

“The population feels like it’s had the rug pulled from under them with this new quake,” said Caroline Haga, humanitarian &amp; emergency communications specialist with the Red Cross.