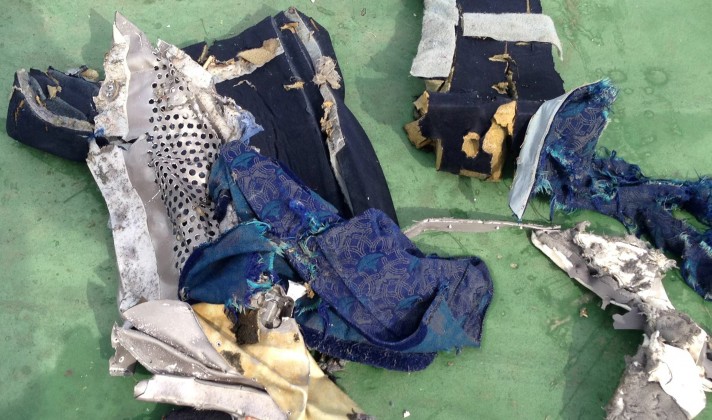 Part of a plane chair among recovered debris of the EgyptAir jet that crashed in the Mediterranean Sea is seen in this handout image released May 21, 2016 by Egypt's military. Egyptian Military/Handout via Reuters

By Amina Ismail and Lin Noueihed

CAIRO (Reuters) – The head of Egypt’s forensics authority dismissed a suggestion on Tuesday that the small size of the body parts retrieved since an EgyptAir plane crashed last week indicated there was an explosion on board.

Investigators struggling to work out why the Airbus 320 jet vanished from radar screens last Thursday, with 66 passengers and crew on board, are looking for clues in the human remains and debris recovered from the Mediterranean Sea so far.

The plane and its black box recorders, which could explain what brought down the Paris-Cairo flight as it entered Egyptian air space, have not been located.

An Egyptian forensic official said 23 bags of body parts have been collected since Sunday, the largest of them no bigger than the palm of a hand. The official, speaking on condition of anonymity, said their size suggested there had been an explosion although no trace of explosives had been detected.

But Hisham Abdelhamid, head of Egypt’s forensics authority, said that assessment was “mere assumptions” and that it was too early to draw conclusions.

At least two other sources with direct knowledge of the investigation also said it would be premature to say what caused EgyptAir flight 804 to plunge into the sea.

French investigators say the plane sent a series of warnings indicating that smoke had been detected on board as well as other possible computer faults shortly before it disappeared.

The signals did not indicate what may have caused the smoke, and aviation experts have said that neither deliberate sabotage nor a technical fault could be ruled out.

Investigators rely on debris, bags and clothes as well as chemical analysis to detect the imprints of an explosion, according to people involved in two previous probes where deliberate blasts were involved.

An Egyptian team formed by the Civil Aviation Ministry is conducting the technical investigation and three officials from France’s BEA air accident investigation agency have also been in Cairo since Friday, with an expert from Airbus, to assist.

Egypt has deployed a robot submarine and France has sent a search ship to help hunt for the black boxes, but it is not clear whether either of them could detect signals emitted by the flight recorders, lying in waters possibly 3,000 meters deep.

The signal emitters have a battery life of just 30 days.

Five days after the plane vanished off radar screens, Egyptian and Greek officials — who monitored the flight before it crossed into Egypt’s air space — have given differing accounts of its last moments.

Greek Defense Minister Panos Kammenos said on Thursday that Greek radar had picked up sharp swings in the jet’s trajectory, 90 degrees left, then 360 degrees right as it plunged from a cruising altitude to 15,000 feet before vanishing from radar.

But Ehab Mohieldin Azmi, head of Egypt’s air navigation services, said Egyptian officials saw no sign of the plane swerving, and it had been visible at 37,000 feet until it disappeared.

“Of course, we tried to call it more than once and it did not respond,” he told Reuters. “We asked the planes that were nearby to give it a relay and we could not reach it. That’s it.”

Egypt’s public prosecutor has asked Greece to hand over transcripts of calls between the pilot and Greek air traffic control, and for the officials to be questioned over whether the pilot sent a distress signal

He also asked France for documents, audio and visual records on the plan during its stopover at Charles de Gaulle airport and until it left French airspace.

At a hotel near Cairo airport where relatives of the victims were giving DNA samples to help identify the body parts recovered so far, grief mixed with frustration.

Amjad Haqi, an Iraqi man whose mother Najla was flying back from medical treatment in France, said the families were being kept in the dark and had not even been formally told that any body parts had been recovered.