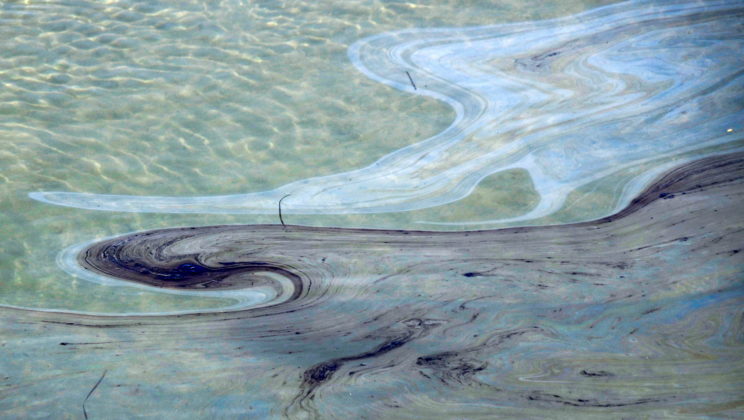 Oil slicks float on the water in the Talbert Channel after an oil spill off the coast of California has come ashore in Huntington beach, California, U.S. October 3, 2021. REUTERS/Gene Blevins

HUNTINGTON BEACH, Calif. (Reuters) -Federal and state investigators on Monday were probing what caused some 126,000 gallons of crude oil to leak into the Pacific Ocean off the coast of southern California.

Huntington Beach, about 40 miles (65 km) south of Los Angeles, was hit hardest with some 13 square miles (34 square km) of ocean and portions of its coastline “covered in oil,” said Mayor Kim Carr.

The oil appeared to come from a production platform operated by Beta Offshore, a California subsidiary of Houston-based offshore crude oil producer Amplify Energy Corporation. Amplify on Monday did not immediately return a call seeking information.

Federal officials have stepped up their scrutiny of aging and idled offshore energy pipelines. Energy companies have built 40,000 miles (64,000 km) of oil and gas pipelines in federal offshore waters since the 1940s.

Regulators have failed to address the risks from idled pipelines, platforms and other infrastructure on the sea floor, the watchdog U.S. Government Accountability Office said this year.

“As pipelines age, they are more susceptible to damage from corrosion, mudslides and sea floor erosion,” GAO said.

Martyn Willsher, an Amplify executive, said on Sunday a pipeline carrying oil from the platform had been shut off and its remaining oil suctioned out. Divers were trying to determine where and why the spill occurred, he said.

Officials deployed 2,050 feet (625 meters) of protective booms, which help contain and slow the oil flows, and about 3,150 gallons had been recovered on Sunday, the U.S. Coast Guard said.