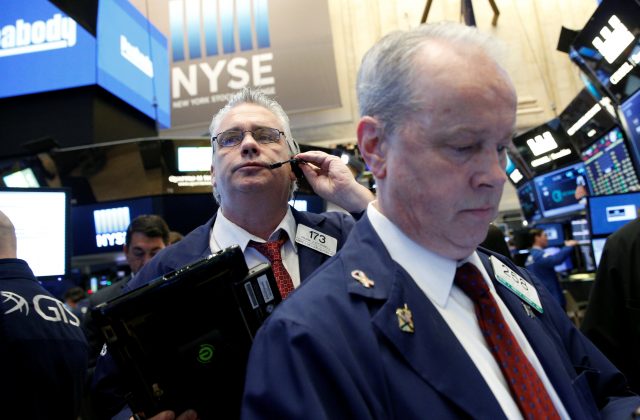 LONDON (Reuters) – Nervous investors sought shelter in gold, Treasuries and the yen on Tuesday as growing tensions over Syria put the U.S. administration and Russia on a collision course.

U.S. Secretary of State Rex Tillerson carried a unified message from world powers to Moscow, denouncing Russian support for Syria, after a meeting with foreign ministers of the Group of Seven major advanced economies and Middle East allies.

Gold <XAU=> hit its highest since November, emerging market stocks <.MSCIEF> were on their worst run of the year so far, while the euro <EURJPY=> fell to a four-month low versus a broadly stronger Japanese yen. <JPY=> [FRX/]

“It’s a relatively modest reaction but there is a lot of geopolitical risk in global markets at the moment,” said TD Securities European head of currency strategy Ned Rumpeltin.

“There is Syria, there is more uncertainty about the U.S. economy after relatively weak jobs numbers and we have French elections coming up.”

The latest polls from France are providing another twist in the race for the presidency, with far-left candidate Jean-Luc Melenchon making ground against the rest of the pack before the first round of voting on April 23.

This has raised the possibility that Melenchon could square off against far-right leader Marine Le Pen – both of whom are eurosceptics – in the election’s decisive second round in May.

German Bunds yields dipped below 0.20 percent for the first time in more than five weeks, before edging higher, while French yields <FR10YT=TWEB> hit a one-week high of 0.96 percent leaving the gap between the two – a key gauge of investors’ concerns – at its widest in six weeks. [GVD/EUR]

“After Britain’s Brexit referendum and the U.S. presidential election surprised markets in 2016, could this event do the same?,” Mark Burgess, global head of equities at Columbia Threadneedle in London, wrote in a note.

Gold <XAU=>, sought at times of global tension as a safe place to store wealth, last traded up 0.3 percent on the day at almost $1,258 an ounce. The precious metal hit a five-month high above $1,270 on Friday after the U.S. missile strike on Thursday.

Oil retreated from five-week highs hit earlier in the day as concerns about rising U.S. shale production offset a shutdown at Libya’s largest oilfield over the weekend and the U.S. strikes against Syria that had supported prices.