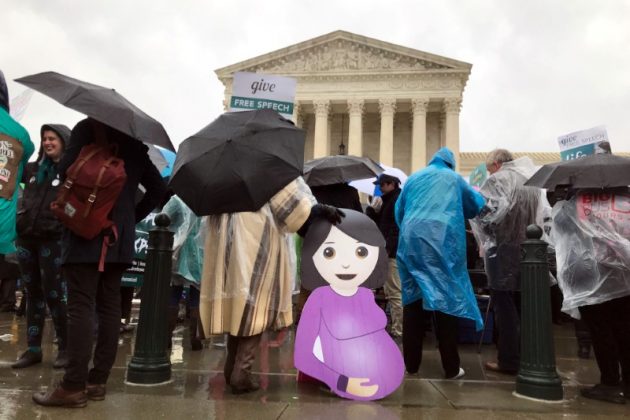 Opponents of a California law, requiring anti-abortion pregnancy centers to post signs notifying women of the availability of state-funded contraception and abortion, hold a rally in front of the U.S. Supreme Court in Washington, U.S., March 20, 2018. REUTERS/Andrew Chung

Rep. Steve King, Iowa Republican, summarizes his bill very simply: “If a heartbeat is detected, the baby is protected.” This is the heartbeat bill we have been supporting. Recently, on our website we have added the ability to send a message to Congress through Paul Ryan by sending a fax supporting this amazing opportunity to help end abortion now! We are urging you to take a minute, go to our website, jimbakkershow.com, hit the “Fax Now – Pass The Heartbeat Bill” button on the top right corner and send the fax to show your support for this bill. It’s easy to do and it’s free! If you want to know more about the Heartbeat Bill that is being considered throughout the United States, we encourage you to watch our shows with Janet Porter and Congressman Tom DeLay. A link will be provided at the conclusion of this article.

(Reuters) – Iowa’s Republican-controlled legislature passed the most restrictive abortion ban in the United States on Wednesday, outlawing the procedure after a fetal heartbeat is detected, often at six weeks and before a woman realizes she is pregnant.

The Senate voted 29-17 to pass the House of Representatives-approved bill, according to the legislature’s online voting tallies. The bill now goes to Republican Governor Kim Reynolds, an abortion opponent, who has not said publicly whether she will sign it into law.

The legislation is aimed at triggering a challenge to Roe v. Wade, the U.S. Supreme Court’s 1973 landmark decision which established that women have a constitutional right to an abortion, activists on both sides of the issue said.

Abortion opponents aim to land abortion questions back in front of the nation’s top court, where they believe the 5-4 conservative majority could sharply curtail abortion access or ban it outright.

“We created an opportunity to take a run at Roe v. Wade – 100 percent,” said Republican state Senator Rick Bertrand of Sioux City, who said the legislation is designed to be “thrust into the court” that has become more conservative following President Donald Trump’s appointment of Justice Neil Gorsuch.

Spokeswoman Becca Lee of Planned Parenthood of the Heartland, which supports access to abortion, called it an “intentionally unconstitutional ban on 99 percent of safe, legal abortion, designed to challenge Roe v. Wade.”

“The bill weaponizes fetal heartbeat, which is by all accounts an arbitrary standard that bans abortion long before the point of fetal viability,” Lee said in an email to Reuters.

Mississippi’s Republican governor in March signed into law a bill banning abortion after 15 weeks with some exceptions, sparking an immediate court challenge by abortion rights advocates.

A similar court challenge is underway in Kentucky, which in April enacted a ban on a common abortion procedure from the 11th week of pregnancy.

The newest Iowa bill, which the state Senate passed early Wednesday after overnight wrangling by lawmakers, requires any woman seeking an abortion to undergo an abdominal ultrasound to screen for a fetal heartbeat. If one is detected, healthcare providers are barred from performing an abortion.

Among the few exceptions are if the woman was raped or a victim of incest and has reported that to authorities.

The bill would ban most abortions in the state and was passed in the final days of the Iowa legislative session.

Note from Editor:  Links to our shows with  Janet Porter and Congressman Tom DeLay.

Join the Fight to Save Babies

Heartbeats, the miracle of Life

One thought on “Iowa passes ‘fetal heartbeat’ abortion ban, most restrictive in U.S.”