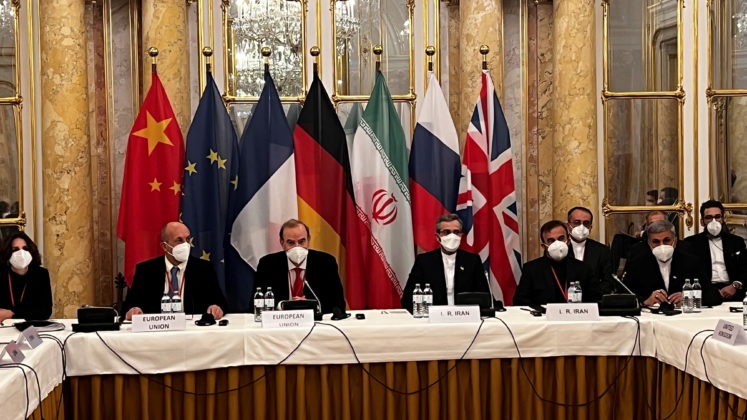 Deputy Secretary General of the European External Action Service (EEAS) Enrique Mora and Iran's chief nuclear negotiator Ali Bagheri Kani wait for the start of a meeting of the JCPOA Joint Commission in Vienna, Austria December 3, 2021. EU Delegation in Vienna/Handout via REUTERS ATTENTION EDITORS - THIS PICTURE WAS PROVIDED BY A THIRD PARTY

VIENNA (Reuters) – Indirect U.S.-Iranian talks on saving the 2015 Iran nuclear deal broke off until next week as European officials voiced dismay on Friday at the demands of Iran’s new, hardline administration.

The seventh round of talks in Vienna is the first with delegates sent by Iran’s anti-Western President Ebrahim Raisi on how to resuscitate the agreement under which Iran limited its nuclear program in return for relief from economic sanctions.

Raisi’s election in June caused a five-month hiatus in the talks, heightening suspicions among U.S. and European officials that Iran is playing for time while advancing its nuclear program.

Diplomats said the Iranian delegation had proposed sweeping changes to a text that was painstakingly negotiated in previous rounds and that European officials had said was 70-80% finished.

“Over five months ago, Iran interrupted negotiations. Since then, Iran has fast-forwarded its nuclear program. This week, it has back-tracked on diplomatic progress made,” senior officials from France, Britain and Germany said in a statement, adding that Iran was demanding “major changes” to the text.

It is “unclear how these new gaps can be closed in a realistic time frame”, they added.

The three European powers expressed “disappointment and concern” at Iran’s demands, some of which they said were incompatible with the deal’s terms or went beyond them.

The 2015 agreement imposed strict limits on Iran’s uranium enrichment activities, extending the time it would need to produce enough fissile material for a nuclear bomb, if it chose to, to at least a year from around two to three months. Most experts say that period is now shorter than before the deal.

In exchange for the nuclear restrictions, the deal lifted U.S., European Union and U.N. sanctions on the Islamic Republic.

After more than two years of Iranian adherence to the core curbs, however, then-President Donald Trump pulled the United States out of the deal in 2018, calling it too soft on Tehran, and reimposed painful U.S. economic sanctions on Tehran.

Tehran retaliated from 2019 by breaching many of the deal’s limits on enrichment and other restrictions, and advancing well beyond them. With the deal’s nuclear benefits now badly eroded, some Western officials say there is little time left before the foundation of the deal is damaged beyond repair.

French President Emmanuel Macron said he thought it likely the current round of talks would not succeed and appeared to look beyond them, hinting at involving more nations, such as Gulf Arab states, in a wider discussion if the Vienna talks fail.

“I think it’s very difficult to find an agreement if the Gulf countries, Israel, all those whose security is directly affected, don’t take part,” he told reporters in Dubai.

Iranian nuclear negotiator Ali Bagheri Kani’s uncompromising stance is that since Washington left the deal, it should make the first move by lifting all sanctions imposed on Tehran since then, even those unrelated to Tehran’s nuclear activities.

Bagheri Kani told Reuters on Monday the United States and its Western allies also should offer guarantees to Iran that no new sanctions would be imposed on it in future.

However, he left the door ajar for more talks by saying European nations could propose their own drafts for discussion, Iranian state media reported.

Western negotiators take a return to the original deal as their base line, meaning if Iran wants sanctions relief beyond it, Tehran should accept more nuclear restrictions.

This week’s talks ended with a meeting of the remaining parties to the deal: Iran, Russia, China, Britain, France and Germany. Officials said the talks, in which others shuttle between U.S. and Iranian diplomats because Iran refuses to meet directly with U.S. officials, will resume mid-week.