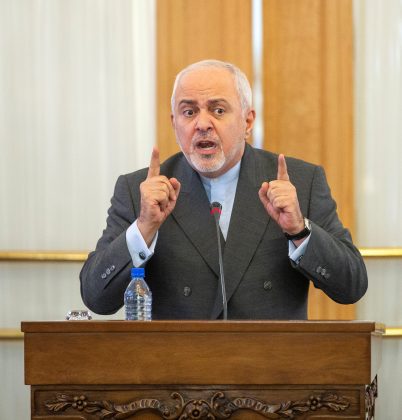 DUBAI (Reuters) – Iran runs security in the Strait of Hormuz and will no longer tolerate “maritime offenses” there, its foreign minister said on Monday, a day after it seized a second oil tanker near the strategic waterway that it accused of smuggling fuel.

Tanker traffic through the Strait has become a focus for an increasingly tense standoff between Washington and Tehran, into which Britain has also been dragged, and the United States has beefed up its military presence in the Gulf since May.

“Iran used to forgo some maritime offenses in … (the) Gulf but will never close (its) eyes anymore,” Foreign Minister Mohammad Javad Zarif told a televised news conference in Tehran.

“… Iran is responsible for the security and safety of the Strait of Hormuz and the region.”

Iran has threatened to block all exports via the Strait, through which a fifth of global oil traffic passes, if other countries comply with U.S. pressure to stop buying Iranian oil.

The deal with a handful of global powers had curbed Tehran’s nuclear work in return for an easing of sanctions, striking a delicate political balance that the U.S. pullout has destabilized.

Strains between Washington and Tehran have heightened further since the spring. In June, Iran’s downing of a U.S. drone prompted preparations for a U.S. retaliatory airstrike that Trump called off at the last minute.

Angered by intensified U.S. sanctions designed to strangle its vital oil trade and the failure of European parties to agree on a way of salvaging the nuclear agreement, Tehran has scaled back its commitments under the pact.

“Iran will leave its 2015 nuclear deal with powers if necessary,” Zarif said on Monday, adding that all measures taken by Iran were, however “reversible if its interests under the deal are secured.”

Iran has so far rejected calls by the Trump administration to negotiate a new deal.

Zarif called for improved ties with Iran’s rivals in the Middle East, where it has been involved in proxy wars for decades with Sunni Saudi Arabia.

He also labeled as “piracy” the seizure by Britain in July of an Iranian oil tanker near Gibraltar that London accused of violating sanctions on Syria.

“Britain has been complicit in the U.S. economic terrorism against Iran,” Zarif said.