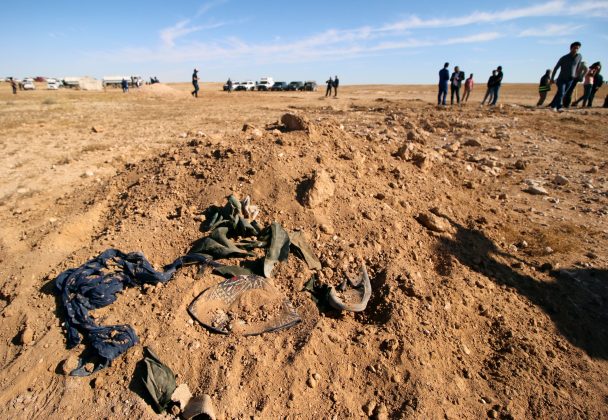 Bits of clothing are seen after they were unearthed from a mass grave of Kurds in west of the city of Samawa, Iraq April 14, 2019. REUTERS/Essam al-Sudani

SAMAWA, Iraq (Reuters) – Iraq must never forget Saddam Hussein’s crimes or allow his party to return, President Barham Salih said on Sunday after attending the unearthing of a mass grave of Kurds killed by the former leader’s forces three decades ago.

The grave, found in the desert about 170 km (106 miles) west of the city of Samawa, contained the remains of dozens of Kurds made to “disappear” by Saddam’s forces, Salih’s office said. 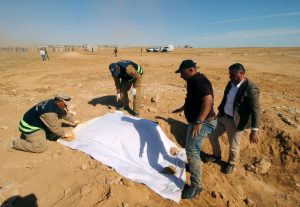 Iraqi members of the Civil Defense cover the bones from an unearthed mass grave of Kurds in west of the city of Samawa, Iraq April 14, 2019. REUTERS/Essam al-Sudani

They were among up to 180,000 people who may have been killed during Saddam’s “Anfal” campaign that targeted Iraqi Kurds in the late 1980s when chemical gas was used, villages were razed and thousands of Kurds were forced into camps.

“He killed them because they did not accept the continuation of this regime, because they wanted to live a free and dignified life,” Salih, a Kurd, told a news conference at the grave site.

“He brought them to Samawa to bury them but our people in Samawa embraced them,” Salih added. Iraq’s southern provinces are predominantly inhabited by Shi’ite Arabs, who also suffered oppression and mass killings under Saddam, a Sunni Arab.

“The new Iraq must never forget these crimes that were committed against Iraqi people from all groups,” he said.