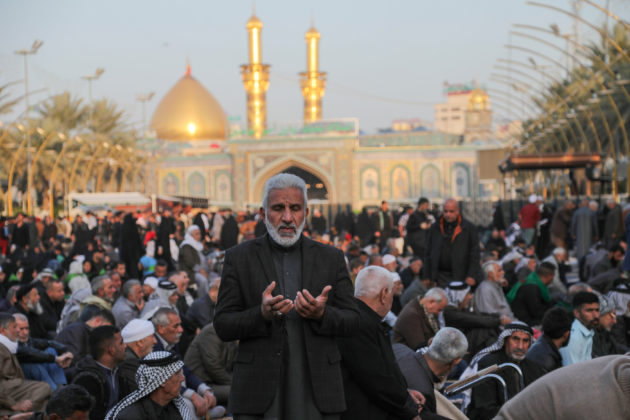 BAGHDAD (Reuters) – Iraq’s top Shi’ite Muslim cleric on Friday berated security forces for failing to protect protesters killed in clashes with rival groups this week in the southern city of Najaf, and urged politicians to pick a government trusted by the people.

The violence in the holy city of Najaf, where Grand Ayatollah Ali al-Sistani is based, killed eight anti-government demonstrators after followers of populist cleric Moqtada al-Sadr stormed their sit-in protest.

The incident laid bare new tensions on the street in Iraq, where nearly 500 people have been killed in months of unrest.

The most recent events have pitted young anti-government protesters against many of Sadr’s followers, known as blue hats for the caps they wear.

Sistani, in remarks delivered by his representative during his weekly Friday sermon in the holy city of Kerbala, condemned the violence in Najaf and blamed security forces for failing to stop it.

“It is the security forces that must take responsibility to keep the peace, protect the protest squares and peaceful demonstrators and identify attackers and rabble rousers,” the representative said.

“There is no excuse for shirking that duty.”

Sistani holds great influence over public opinion among Iraq’s Shi’ite majority. He avoids commenting on politics except during crises. His withdrawal of support for the government of Adel Abdul Mahdi in November sealed the outgoing premier’s fate.

Sistani urged that the new government which Allawi will form be representative of the Iraqi people and said it must have their full trust.

“It must be capable of calming the situation and take steps toward early elections free of the influence of money, weapons and foreign interference,” he said.

Some protesters had hoped Sistani would reject Allawi who was named last week ending weeks of deadlock between political blocs.

“We hope Sistani will reject Allawi and the deal between the parties on Friday,” Mahdi Abdul Zahra, a protester in Baghdad, said.

The rival and two most powerful parliamentary blocs of Sadr and a grouping of Iran-backed parties put their differences aside to approve Allawi’s nomination.

Sadr has regularly threatened to call all his followers out to protest alongside the anti-government movement. The followers including the blue hats had been unofficially involved in the demonstrations and at times protected protesters from assaults by security forces and Iran-aligned militiamen.

His move to support Allawi, and subsequent calls for the blue hats to remove protest camps deemed to be preventing schools or businesses from functioning, is seen as betrayal by many.

“I used to support the Sadrist movement. But the minute he did this, I stopped. I’ve erased all by Facebook posts that supported him,” Abdul Zahra said from a main square where protesters skirmished with police.

The protests began in October and swelled in cities throughout the Shi’ite south, pitting impoverished and jobless masses against the Shi’ite-dominated and Iran-aligned government.

Security forces and unidentified gunmen have shot dead nearly 500 people since then.