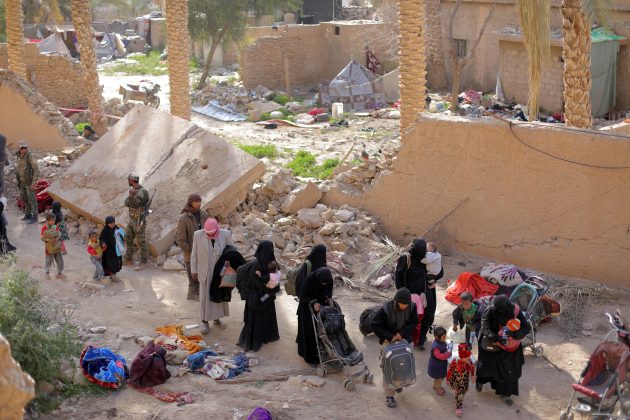 Islamic state fighters and their families walk as they surrendered in the village of Baghouz, Deir Al Zor province, Syria March 12, 2019. REUTERS/Rodi Said

BAGHOUZ, Syria (Reuters) – Islamic State launched two counter attacks on U.S.-backed fighters besieging their final shred of territory in eastern Syria on Wednesday but were beaten back without any progress, the Syrian Democratic Forces said.

The jihadists, waging a last-ditch battle in Baghouz, a collection of hamlets and farmland near the Iraqi border, dispatched suicide bombers against SDF fighters, who thwarted the attacks, the U.S.-backed force said.

Islamic State launched the second counter-attack in the afternoon, “(taking) advantage of smoke and dust over Baghouz”, the SDF media office said. “Fighting is still continuing. (Islamic State) made no progress so far and were stopped.”

There were no SDF casualties. “They attempted to carry out suicide attacks but failed,” the SDF said.

Black smoke mushroomed high over Baghouz as the sounds of gunfire, explosions and planes could be heard in a battle that the SDF has said is as good as over.

In parts of Baghouz already under SDF control, dirt roads were littered with the scorched remains of cars, trucks and motorcycles. Many houses had been completely flattened and roads had been cratered by missile strikes.

Islamic State’s black flag could still be seen painted on walls, while others had been emblazoned with freshly daubed SDF slogans and the words “Down with Daesh”, an Arabic acronym for the jihadists.

Islamic State (IS) held roughly one third of Syria and Iraq at the zenith of its power in 2014, when its leader Abu Bakr al-Baghdadi declared himself “caliph”, or leader of all the world’s Muslims.

Subsequently, IS was steadily beaten back by a range of enemies including the U.S.-led international coalition, suffering its major defeats in 2017 when it lost the Iraqi city of Mosul and its Syrian headquarters at Raqqa.

No Islamic State leaders are believed to be in Baghouz, according to a U.S. defense official. U.S. government experts strongly believe Baghdadi is alive and possibly hiding in Iraq.

The group is still assessed to remain a potent security threat operating in remote territory in both Syria and Iraq.

Mustafa Bali, head of the SDF media office, said its forces had bombarded Baghouz heavily overnight before engaging in direct clashes with IS fighters in the pre-dawn hours.

“There were suicide vest attacks by a group of bombers who tried to blow themselves up amidst our forces. Our forces targeted and killed them before they reached our positions,” Bali said.

The SDF has laid siege to Baghouz for weeks but had repeatedly postponed its final assault to allow thousands of civilians, many of them wives and children of Islamic State fighters, to leave. It resumed the attack on Sunday.

Around 3,000 IS fighters and their families surrendered to SDF forces in 24 hours, Bali said overnight. Three women and four children belonging to the Yazidi sect, a minority group who were kidnapped and enslaved by IS in 2014, were also freed, he said.

Islamic State put out a new propaganda video overnight Monday filmed in recent weeks inside Baghouz, maintaining its claim to leadership of all Muslims and calling on its supporters to keep the faith.

“Tomorrow, God willing, we will be in paradise and they will be burning in hell,” one of the men interviewed in the video said.

Though Islamic State is on the verge of losing its last piece of territory, Syria remains carved up among other parties to its multi-sided conflict: President Bashar al-Assad’s government, the Kurdish-led SDF, and anti-government rebels.

The war has escalated in recent weeks between the Assad government and insurgents in the northwestern region of Idlib, where Islamist militant group Tahrir al-Sham holds sway.

Overnight, government forces rained incendiary bombs on the area, where a full-scale offensive was averted in September by an agreement brokered by Assad’s Russian allies and Turkey, which backs his opponents and has forces on the ground.