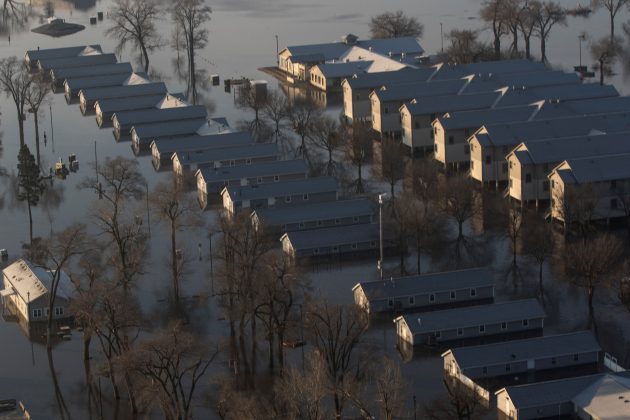 (Reuters) – Flooding that killed three people in the central plains of Nebraska and Iowa has cut roads to a nuclear power plant and inundated a large portion of a U.S. Air Force base, forcing it to work with a skeleton staff on Monday, while more of region’s residents possibly faced evacuation.

The floods, which have prompted each state’s governor to declare a state of emergency, are the result of last week’s “bomb cyclone” winter storm, a winter hurricane that blew in from the western Rocky Mountains. Three people died in the flooding and at least one person was missing after hundreds of weekend rescues. 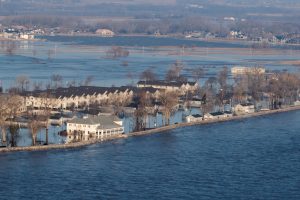 The floodwaters forced the operators of the Cooper nuclear plant, near Brownville, Nebraska, to fly in staff and supplies by helicopter, and covered one-third of that state’s Offutt Air Force Base, near Bellevue, home to the U.S. Strategic Command. The nuclear plant continued to operate safely and was at full power, its operator said.

The National Weather Service reported that some of the region’s larger rivers were running at record highs above flood level, causing levy breaks. Some small towns and communities have been cut off by floods while others have seen fresh drinking water become scarce. Floodwaters destroyed many homes and businesses over the weekend.

The NWS reported that temperatures across the hardest-hit areas will reach above 50 degrees Fahrenheit (10 C) through midweek and exceed 60 Fahrenheit by Friday. That would speed the pace of snow melt across the region and contribute water to already swollen rivers, the NWS said, possibly forcing evacuations in communities along the Missouri River on the Nebraska and Iowa border, as well as along the Elkhorn and Platte rivers in Nebraska.

“There could be issues across portions of Nebraska and Kansas for the next seven days,” NWS meteorologist Jim Hayes said.

Nebraska Governor Pete Ricketts, who declared a statewide emergency last week, said on Monday that emergency officials have rescued about 300 people but that at least one person was missing.

At Offutt Air Force Base, 30 buildings had been flooded by up to 8 feet (2.4 m) of water and 30 more structures had been damaged, according to reports by the Omaha World-Herald, citing a base spokeswoman. Base officials did not immediately respond to a request for comment.

The weather was blamed for three deaths, including one person who died at home after failing to evacuate, and a man swept away while trying to tow a trapped car with his tractor.

In Iowa, one man died after he was submerged in floodwaters on Friday in Riverton, according to the Fremont County Sheriff’s Office.

Iowa Governor Kim Reynolds also issued an emergency proclamation at the outset of the flooding.

(Reporting by Gina Cherelus in New York and Rich McKay in Atlanta; Editing by Scott Malone)