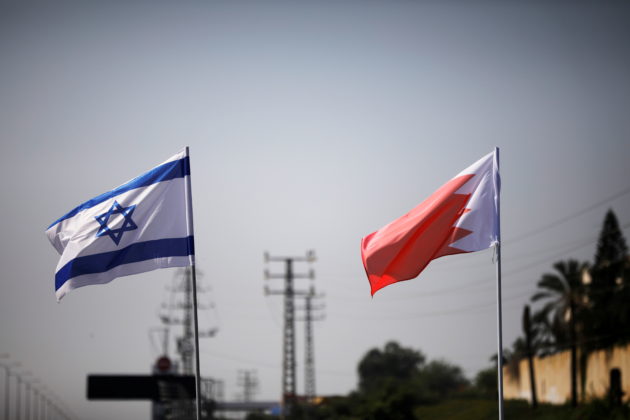 FILE PHOTO: The flags of Israel and Bahrain flutter along a road in Netanya, Israel September 14, 2020. REUTERS/Nir Elias/File Photo

JERUSALEM (Reuters) – Bahrain and Israel said on Wednesday they would open embassies, establish online visa systems and launch weekly flights between the countries soon, in a broadened cooperation promoted by Washington as an economic boon and means of isolating Iran.

On the first official visit by Bahraini officials to Israel, the Gulf kingdom’s foreign minister, Abdullatif Al-Zayani, said a Sept. 15 deal normalizing relations spelled “a warm peace that will deliver clear benefits to our peoples”.

The United Arab Emirates, which has also normalized ties with Israel, sent a delegation last month that did not leave Ben Gurion Airport in what was described as a coronavirus precaution.

The Bahraini envoys went on to Jerusalem, which Israel, with U.S. backing, considers its capital. Palestinians want East Jerusalem for a hoped-for state.

Al-Zayani’s trip coincided with a visit to Israel by U.S. Secretary of State Mike Pompeo, who hailed the regional rapprochement brokered by the Trump administration as it presses sanctions against Iran.

The normalization deals “tell malign actors like the Islamic Republic of Iran that their influence in the region is waning and that they are ever more isolated and shall forever be until they change their direction,” Pompeo said alongside his Bahraini counterpart and Israeli Prime Minister Benjamin Netanyahu.

Al-Zayani announced that, as of Dec. 1, Bahrainis and Israelis will be able to apply online for entry visas. He also submitted a request to open a Bahraini embassy in Israel and said an Israeli embassy had been approved for Manama.

Israeli Foreign Minister Gabi Askenazi, who is due to visit Manama next month, said he hoped opening ceremonies for the embassies would be held by the end of 2020.

The Bahraini delegation travelled on Gulf Air flight GF972 – a reference to Israel’s telephone country code – in what was the airline’s first flight to Tel Aviv. Al-Zayani predicted 14 such flights weekly starting next year, as well as flights to the smaller Israeli destinations of Haifa and Eilat.

Sudan followed Bahrain and UAE in announcing last month it would move towards ties with Israel. The engagement has outraged Palestinians, who want their statehood goal achieved first.

Further such developments appear unlikely before U.S. President-elect Joe Biden takes office. Israel was due to send a first delegation to Sudan on Sunday, officials told Reuters, but the trip was postponed over what they described as logistical issues.

Speaking on Israel’s Army Radio, Intelligence Minister Eli Cohen said a commitment towards a tough policy on Iran by Biden would determine whether other countries would opt for normalization deals with Israel.