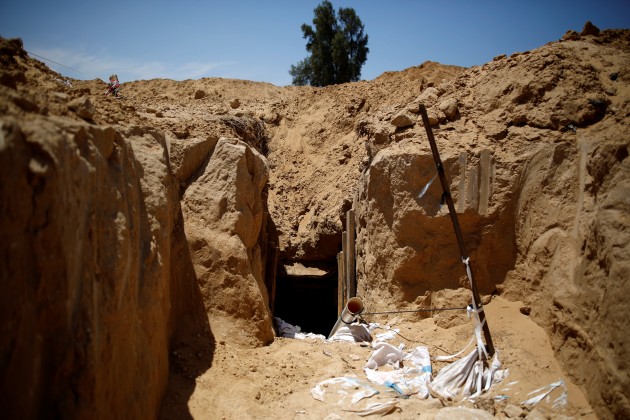 An entrance to a tunnel which Israel's military said it had discovered is seen just outside the southern Gaza Strip May 6, 2016. REUTERS/ Amir Cohen TPX IMAGES OF THE DAY

SUFA, Israel (Reuters) – Israel’s military said it had discovered a cross-border tunnel on Thursday built by the Islamist group Hamas from the Gaza Strip during a rare flare-up of violence along a border that has been largely quiet since a 2014 war.

Gaza hospital officials said a 54-year-old woman had been killed and a man wounded by fragments of an Israeli tank shell fired near Rafah during the violence, which erupted on Wednesday.

Israel’s Shin Bet undercover intelligence agency said a Hamas operative arrested last month had provided useful information about the tunnel networks in the area, though it did not explicitly attribute Thursday’s discovery to his data.

Gaza analysts said the flare-up of violence, the most intense since the 2014 war, threatened the truce that has largely held in the area for nearly two years.

Israeli Prime Minister Benjamin Netanyahu was set to convene senior ministers on Friday to discuss the situation. Defence Minister Moshe Yaalon said after touring the area that Israel would not be deterred by Hamas’s threats and would continue to search “until all the tunnels are found.”

A senior Hamas official, Khalil al-Hayya, said efforts by Qatar and Egypt were ongoing to try to restore calm, but he warned that “Israeli incursions into Gaza would not be tolerated.”

Militants fired mortar shells at Israeli forces working to unearth the tunnel and Israel responded with tank fire and air strikes, an army spokeswoman said. The violence had subsided by late Thursday night and there was a period of calm toward midnight.

Israeli aircraft earlier targeted four Hamas positions in the vicinity of the tunnel, the military said. During Wednesday and Thursday, there were 10 instances of Hamas fire against Israeli forces operating in the area, it added.

Hamas, Gaza’s de facto ruler, has not confirmed responsibility for the shelling and did not comment on the announcement of the tunnel’s discovery.

Lieutenant-Colonel Peter Lerner, an Israeli military spokesman, said the tunnel unearthed on Thursday was situated 28 meters (31 yards) below the surface and that an investigation was under way to determine whether it was dug before or after the war.

Lerner said the militants may have started firing mortars at the Israeli forces to prevent them discovering the tunnel. Last month a first tunnel was unearthed without incident.

But the armed wing of Hamas said the tunnel was not new and had been in use in the early part of the war in 2014.

Israel has been wary about discussing what means it has employed to uncover the tunnels but the arrest of Mahmoud Atouna, 29, from Jabalya in the northern Gaza Strip early last month may have helped.

“Atouna provided his interrogators much information about the tunnel routes in the northern Gaza Strip, its tunnel-digging methods, the use of private homes and public buildings to bore tunnels and materials used,” Shin Bet said in a statement on Thursday.

More than 2,100 Palestinians, mostly civilians, were killed during the 2014 Gaza conflict. Sixty-seven Israeli soldiers and six civilians in Israel were killed by rockets and attacks by Hamas and other militant groups.