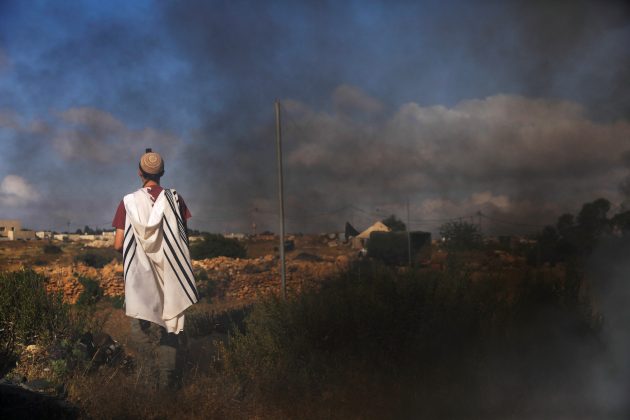 Under a Supreme Court order, the 15 dwellings are to be demolished within the next few days. Hundreds of young pro-settlement activists gathered on Tuesday in several of the homes slated for demolition. Some of the protesters climbed onto the roof of one dwelling and hoisted Israeli flags.

A few scuffles ensued with police but for the most part, demonstrators offered passive resistance and were carried away by officers who grabbed hold of their arms and legs. In one home, an Israeli policeman hugged a weeping man as he escorted him out.

Most countries consider all Israeli settlements built in the West Bank and other land captured in the 1967 Middle East war as illegal. Israel disputes this, and there are now about 500,000 Israeli settlers living among some 2.6 million Palestinians in East Jerusalem and the occupied West Bank.

The entire Netiv Ha’avot settlement was built without official Israeli authorization, but the government has retroactively agreed to allow the rest of the community to stay once the 15 homes built on private Palestinian land come down.

“People are being torn from their houses and families are sad,” said Elazar Herz Van Spiegel, 45, a Netiv Ha’avot settler, whose home was not one of those due to be demolished. “But … we are very optimistic about the future.”

Palestinians dismissed the dismantling of a small number of homes as an empty gesture.

Wassel Abu Youssef, a Palestine Liberation Organization official said: “All settlement is illegal and must be removed. Israel is trying to fool world public opinion by removing some homes here and there while it continues to build settlements.”

The Israeli government has announced a plan to pay compensation to the families whose homes are to be razed and rehouse them on adjacent tracts not owned by individual Palestinians.

The remainder of Netiv Ha’avot, where some 20 houses stand on land not covered by the court ruling, is to be granted legal status and designated a neighborhood of an Israeli government-recognized settlement, Elazar, the cabinet decided in February.

Israeli authorities have carried out similar evictions in the past under court order. In February 2017, some 300 settlers were removed from the unauthorized outpost of Amona in the West Bank.

But settlement expansion, which has drawn Palestinian and international condemnation, has continued, with little objection from the administration of U.S. President Donald Trump in contrast to criticism voiced by his predecessor Barack Obama.

Palestinians seek to establish a state in the West Bank and Gaza Strip, with East Jerusalem as its capital, and say Israeli settlements are intended to deny them a viable and contiguous country. Israel’s refusal to halt settlement expansion was one of the reasons peace talks collapsed in 2014.