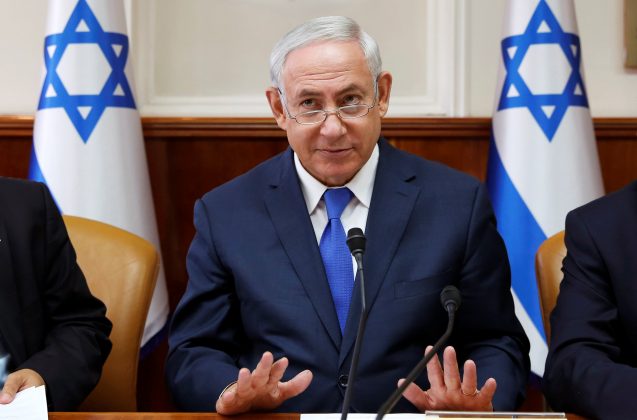 JERUSALEM (Reuters) – Israel said on Tuesday it would not hold peace negotiations with a Palestinian government dependent on the Islamist Hamas group, responding to a new reconciliation agreement between the two main Palestinian factions.

Under the Egyptian-brokered accord, the Fatah-backed government headed by Prime Minister Rami al-Hamdallah will run Gaza and the West Bank and Palestinian officials said there were no plans to add Hamas ministers to the government.

The last Israeli-Palestinian peace talks collapsed in 2014, partly due to Israel’s opposition to an earlier attempt at a Fatah-Hamas unity pact, and to Israeli settlement building on occupied land Palestinians seek for a state, among other factors.

In a statement on Tuesday after a meeting of senior Israeli ministers known as the Security Cabinet, Prime Minister Benjamin Netanyahu reaffirmed longstanding Israeli demands that Hamas abandon militancy.

“Pursuant to previous decisions, (Israel) will not conduct diplomatic negotiations with a Palestinian government that relies on Hamas, a terrorist organization that calls for the destruction of Israel, as long as it does not fulfill the following conditions,” the statement began.

It outlined seven conditions including a demand that Hamas recognize Israel and disarm, sever its ties with Iran, return bodies of Israeli soldiers and civilians Israel believes are alive and held in Gaza, and that Abbas’s Palestinian Authority (PA) assume full security control of the coastal enclave.

Under the reconciliation deal, about 3,000 Fatah security officers are to join the Gaza police force but Hamas will remain the most powerful armed Palestinian faction in the territory, with some 25,000 well-equipped militants.

Analysts said the current deal is more likely to stick, given Hamas’s growing isolation from erstwhile donor states and realization of how hard it would be to govern and rebuild Gaza.

Abbas spokesman Nabil Abu Rdainah said the Palestinians would not be swayed by Israel’s statement as it “will not change the official Palestinian position to move forward with reconciliation efforts.”

He said the deal and the PA’s return to Gaza had been welcomed by major powers including the United States and this would “achieve the aspirations of our people … ending the occupation and establishing an independent Palestinian state.”

Netanyahu’s call is certain to please the right flank of his coalition and settler supporters with whom he has tried to find favor. On Tuesday, Israel announced more plans to build hundreds of new settler homes in the occupied West Bank.

But it could hamper U.S. mediation attempts to resume peace negotiations. U.S. President Donald Trump’s Middle East peace negotiator, Jason Greenblatt, and his son-in-law Jared Kushner have held discussions to achieve what Trump hopes will be the “deal of the century”.