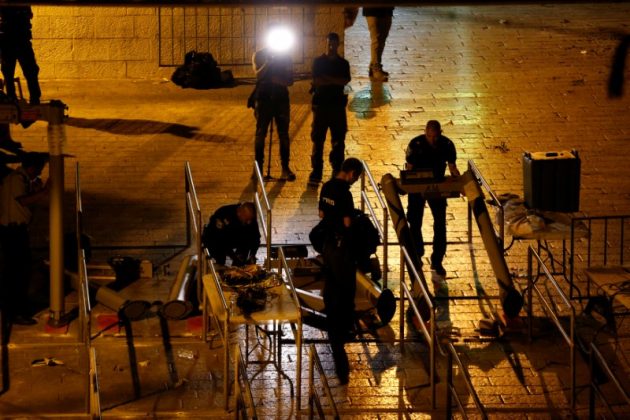 Israeli security forces remove metal detectors which were recently installed at an entrance to the compound known to Muslims as Noble Sanctuary and to Jews as Temple Mount in Jerusalem's Old City July 25, 2017. REUTERS/Ammar Awad

JERUSALEM (Reuters) – Israel removed metal detectors from entrances to the Aqsa mosque compound in Jerusalem’s Old City on Tuesday in favour of CCTV cameras, hoping to calm days of bloodshed, but Palestinians said the modified security measures were still unacceptable.

Israel installed the detectors at entry points to Al-Aqsa mosque compound in Jerusalem after two police guards were fatally shot on July 14, setting off the bloodiest clashes between Israelis and Palestinians in years.

The spike in tensions and the deaths of three Israelis and four Palestinians in violence on Friday and Saturday raised international alarm and prompted a session of the United Nations Security Council to consider ways of defusing the crisis.

Palestinian Prime Minister Rami Hamdallah and the senior Muslim cleric who oversees Al-Aqsa compound both turned down the new Israeli measures and demanded all of them be removed.

“We reject all obstacles that hinder freedom of worship and we demand the return to the situation where things stood before July 14,” Hamdallah told his cabinet in Ramallah in the Israeli-occupied West Bank.

The Waqf, the religious body that runs the Islamic sites in the Al-Aqsa compound, said worshippers would continue to stay away from the elevated, marble-and-stone plaza and pray in the streets outside.

A Waqf spokesman said it was awaiting a decision of a technical committee but was demanding the situation revert to the way it was before July 14, when the metal detectors were installed.

David Friedman, the U.S. ambassador to Israel, said while visiting Israel’s parliament that Washington had talks with Israel and Jordan to resolve the crisis.

“(There was) a lot of hard work behind the scenes, discussions by senior officials in the United States, and of course, with the prime minister and with the king of Jordan, (and) we were able to defuse the situation very quickly that obviously, under other circumstances, could have not ended as successfully,” Friedman said.

A statement issued after the security cabinet meeting said it had decided to heed a recommendation of Israeli security bodies and replace the detectors with “smart checking” devices.

In the pre-dawn hours, municipal workers began work in some of the narrow stone-paved streets around the Aqsa compound to install overhead metal beams that will hold closed-circuit TV cameras. Israeli media said there were plans to invest in advanced camera systems.

The cabinet statement added that it had allocated up to 100 million shekels ($28 million) for the equipment and for additional policing over the next six months.

CCTV images indicated that the two Israeli police officers on guard duty were shot dead by three Israeli Arabs who had concealed weapons inside the Aqsa compound, Islam’s third most sacred site.

The dispute, like many in the Holy Land, is about much more than security devices, taking in issues of sovereignty, religious freedom, occupation and Palestinian nationalism.

The walled Old City is part of East Jerusalem that Israel captured from Jordan in a 1967 war and later annexed, declaring the city its “eternal indivisible capital” in a move not recognised internationally. Palestinians claim East Jerusalem for the capital of a future state they are seeking.

The decision to remove the metal detector gates was an about-turn after the rightist Netanyahu, wary of being seen to capitulate to Palestinian pressure, pledged on Sunday that the devices would stay put.

But on top of the outbreak of violence mainly in the Jerusalem area, a move on Friday by Palestinian President Mahmoud Abbas to suspend security coordination , plus international criticism, cranked up pressure on Israel.

Netanyahu was further hampered by a fatal shooting at the Israeli Embassy in Jordan on Sunday when an Israeli security guard was attacked and shot dead two Jordanians.

Jordan is the custodian of Jerusalem’s Muslim holy sites, which Jews revere as the vestige of their two ancient temples. Jordan’s King Abdullah has called on Israel to return to the pre-July 14 status quo and lift all unilateral measures taken since the attack on the policemen.

Jews and anyone else visiting the Western Wall – the holiest site where Jews are permitted to pray – at the foot of the Aqsa compound must pass through airport-style security screening, including metal detectors.