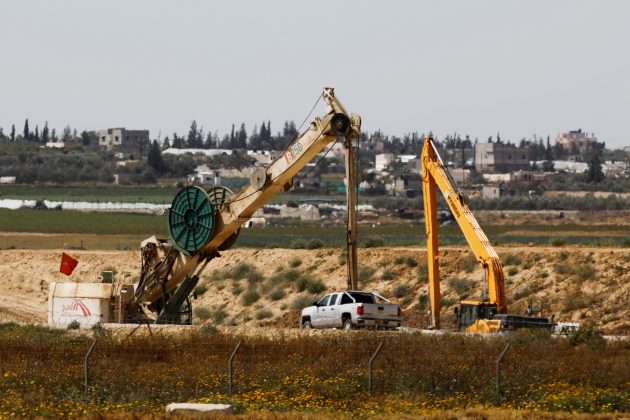 FILE PHOTO: Construction work can be seen on the Israeli side of the border between Israel and the Gaza Strip, Israel March 18, 2018. REUTERS/Amir Cohen/File Photo

JERUSALEM (Reuters) – Israel said on Sunday it destroyed a guerrilla tunnel from the Gaza Strip and gave rare details on a classified military laboratory spearheading efforts to foil the cross-border digs.

Palestinian gunmen used tunnels to blindside Israeli forces during the 2014 Gaza war. Israel has since been developing detection technologies and laying down an underground frontier wall which, it says, will end the Gaza tunnel threat by 2019.

It is the fifth such detection in as many months and Israeli officials regard publicity around their tunnel hunts as a double-edged sword.

They hope it will discourage new digs but worry it could prompt militants to preempt the razing of any existing passages by using them for attacks.

The most recent discovery was of a passage running “kilometres” from within Gaza to just over the border, Israel’s military said on Sunday, accusing the enclave’s dominant Hamas Islamists of being behind the project. Hamas did not comment.

“We were able to detect, and we destroyed it, using similar means that we have used in the past,” military spokesman Lieutenant-Colonel Jonathan Conricus told reporters.

“There was no use of explosives, but rather, we filled the tunnel, which rendered it useless for a very long period of time.”

Conricus did not elaborate on the means of detection nor how the tunnel was filled. Such details are secret in Israel, which has received U.S. congressional funding for the project.

Later on Sunday, Israel went public with a military laboratory it set up in 2016 to pool anti-tunnel expertise.

The laboratory “uses innovative ground research, which includes scanning of cavities and their dynamics, (and) strives to develop new discovery and mapping techniques”, a military statement said.

A video release showed soldiers, with faces obscured, poring over maps and computer screens at an undisclosed location.

Israel offered no explanation for its publication about the laboratory, which followed a surge in Gaza border protests that organisers want to peak in mid-May – the 70th anniversary of Israel’s founding, which Palestinians mourn as a catastrophe.

Israeli army snipers have killed 31 Palestinians during the demonstrations, drawing international censure. The military says it is taking necessary action against people suspected of trying to damage the border fence or provide cover for Hamas attacks.

Hamas, which is sworn to Israel’s destruction, has denied having any such plans.

The tunnel whose discovery was made public on Sunday crossed the border with Israel near the site of intensive Palestinian disturbances, Conricus said. “I wouldn’t think that it’s a coincidence,” he added, without elaborating.

Israeli Energy Minister Yuval Steinitz said geophysicists from his ministry were involved in the anti-tunnel efforts, as well as researchers from the Technion, an Israeli university, and from state-owned Rafael Advanced Defence Systems.