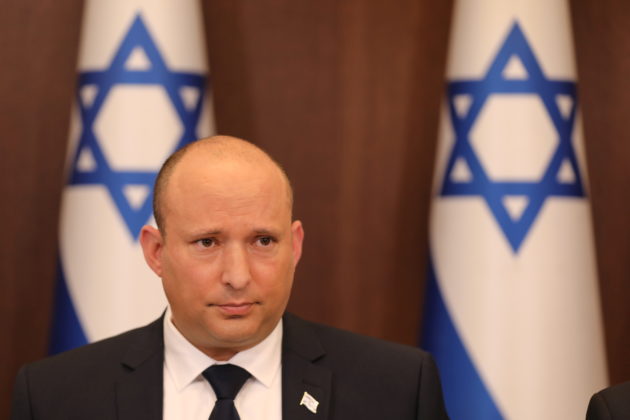 JERUSALEM (Reuters) -Iran is five years away from developing a nuclear weapon, and international talks due to restart next week will do nothing to slow it down, Israel said on Tuesday, adding it reserved the right to act to protect itself.

Indirect negotiations to revive the 2015 accord, under which Iran agreed to curbs on its nuclear program in return for the lifting of international sanctions, are due to resume in Vienna next Monday after a five-month pause.

Israel long opposed the nuclear deal, but Prime Minister Naftali Bennett’s government, in power since June, had previously said it could be open to a new deal with tougher restrictions. In remarks on Tuesday to a security forum, however, he sounded less accommodating.

Bennett described Iran, which denies it is pursuing nuclear arms, as being at “the most advanced stage” of a nuclear weapons program.

“In any event, even if there is a return to a deal, Israel is of course not a party to the deal and Israel is not obligated by the deal,” he told the conference, hosted by Reichman University.

Finance Minister Avigdor Lieberman said: “With or without an agreement, Iran will be a nuclear state and have a nuclear weapon within five years, tops.”

Israel, itself widely believed to have nuclear weapons, has long argued that the 2015 deal was too weak to prevent Iran from pursuing a bomb. Former U.S. President Donald Trump abandoned the deal in 2018, describing it as too soft, and Iran responded by violating some of the deal’s restrictions. President Joe Biden’s administration aims to revive it.

Israel has also complained that the nuclear agreement does nothing to rein in Iran’s missile program, or hostile activity by Iranian-backed militia.

“The Iranians have encircled the State of Israel with missiles while they sit safely in Tehran,” Bennett said. “To chase the terrorist du jour sent by the (Iranian covert) Qods Force does not pay off anymore. We must go for the dispatcher.”