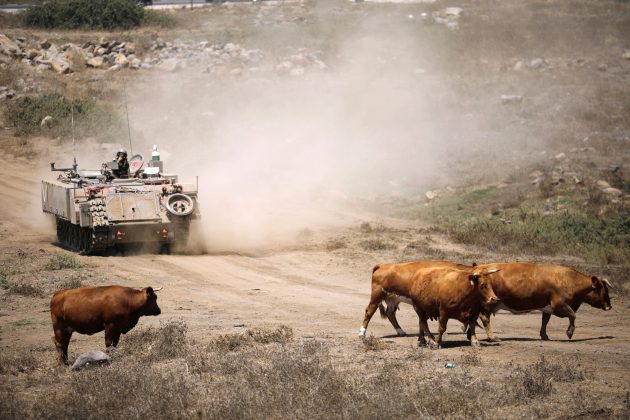 An Israeli soldier rides an armoured vehicle during an army drill after the visit of Israeli Defence Minister Avigdor Lieberman in the Israeli-occupied Golan Heights, Israel August 7, 2018. REUTERS/Amir Cohen

MEROM GOLAN, Golan Heights (Reuters) – Israel’s defense minister said on Tuesday that Syria was building up its ground forces beyond their pre-civil war size, an assessment that suggests President Bashar al-Assad’s army has recovered from a critical manpower shortage earlier in the war.

The Syrian military was hit by major defections in the first years of the conflict, which began in 2011, and by 2015 Assad acknowledged that “a shortfall in human capacity” meant the army could not fight everywhere for fear of losing vital ground.

Russia intervened militarily soon afterward to turn the tide of war and has been helping arm and train the Syrian army. Iran has also backed Assad, sending military advisers and allied Shi’ite militia from across the region to support his troops.

Pro-government forces in the Syrian conflict have also included local militias raised by the Lebanese Hezbollah with Iranian support, including the National Defence Forces.

“Across the way we see the Syrian military, which is not satisfied with just taking over all of Syrian territory but is expressly building a broad-based, new ground army that will return to its previous proportions and beyond,” Defence Minister Avigdor Lieberman told reporters during a tour of the Golan Heights.

Israel closely monitors the military capacity of Syria, an adversary against which it has fought three wars. It captured part of the Golan Heights from Syria in 1967 and has occupied it since.

With Assad now regaining control, Israel has voiced worry that he might defy a 44-year-old Golan demilitarisation deal that had stabilized their standoff. 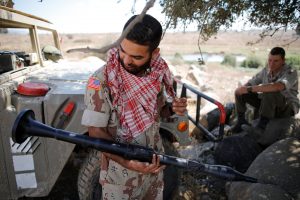 An Israeli soldier is dressed-up playing the role of the enemy takes part in an army drill after the visit of Israeli Defence Minister Avigdor Lieberman in the Israeli-occupied Golan Heights, Israel August 7, 2018. REUTERS/Amir Cohen

In a Twitter statement, Lieberman said that Israel’s tanks, deployed on parts of the strategic plateau that it captured from Syria in a 1967 war, were “our crushing strike force and will know how to defend the border in any eventuality”.

In a May interview, Assad also said Syria had improved its air defenses with Russian help.

The Golan saw large tank battles in 1967 and the subsequent Israel-Syria war in 1973. Israel annexed its side of the Golan in 1981, in a move not recognized internationally.

In a July 19 briefing, the chief of Israel’s armored corps told reporters that while the number of Israeli tanks fielded was unlikely to grow, a new, improved tank model would be introduced in 2021.