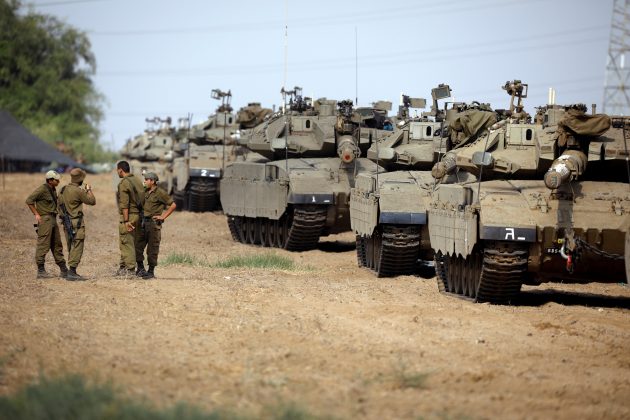 Israeli soldiers speak next to tanks as military armoured vehicles gather in an open area near Israel's border with the Gaza Strip October 18, 2018. REUTERS/Amir Cohen

YAD MORDECHAI, Israel (Reuters) – Israel ramped up its armored forces along the Gaza border on Thursday in a daylight show of force, a day after a Palestinian rocket destroyed a home in southern Israel.

With the deployment clearly visible from main Israeli roads near the Gaza Strip, senior Egyptian security officials met leaders of the enclave’s ruling Hamas to try to calm tensions.

Much may depend on the scope and intensity of a planned Palestinian protest at the border with Israel on Friday, where often violent demonstrations have been held over the past six months.

Israeli Prime Minister Benjamin Netanyahu, who convened his security cabinet on Wednesday after the rocket wrecked a home in the city of Beersheba, pledged to take “very strong action” if Palestinian attacks continued.

Israeli leaders have said they will not tolerate rocket attacks or attempts, during the border protests, to breach Israel’s frontier fence with the Palestinian territory of two million people.

A Reuters photographer counted some 60 tanks and armored personnel carriers at a deployment area near the border, calling it the largest number he has seen there since the 2014 war between Israel and Hamas.

In Gaza, a Palestinian official said the Egyptian delegation was also in contact with Israeli leaders to curb the current tensions.

“The situation is delicate. No one wants a war,” he said.

“Palestinian factions are demanding an end to the Israeli blockade that strangled life and business in Gaza,” the official told Reuters.

Palestinians have been protesting along the border since March 30, demanding an end to Israel’s blockade of Gaza and the right to return to lands that Palestinians fled or were driven from upon Israel’s founding in 1948.

About 200 Gazans have been killed by Israeli troops since the border protests began, according to Palestinian Health Ministry figures. Palestinians have launched incendiary balloons and kites into Israel and on occasion breached an Israeli frontier fence.

More than 2 million Palestinians are packed into the coastal enclave. Israel withdrew its troops and settlers from Gaza in 2005 but maintains tight control of its land and sea borders. Egypt also restricts movement in and out of Gaza on its border.

In addition to sporadic incidents, Israel and Hamas have fought three wars in the past 10 years. The internationally-mediated peace process aimed at finding a two-state solution to the Israeli-Palestinian conflict is all but moribund.

(Reporting by Amir Cohen, and Nidal Almughrabi in Gaza, Writing by Jeffrey Heller, Editing by Ori Lewis and Richard Balmforth)