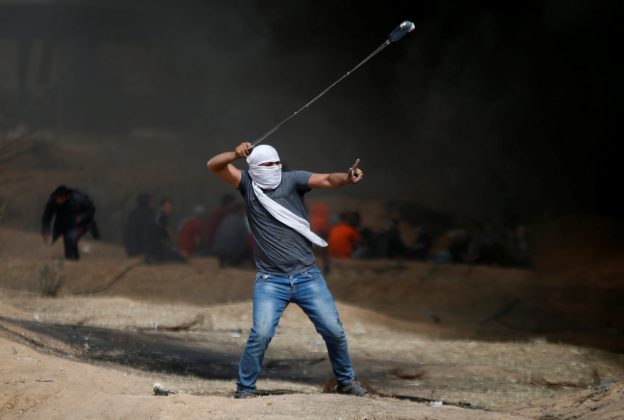 A demonstrator gestures as he hurls stones during clashes with Israeli troops at a protest at the Israel-Gaza border where Palestinians demand the right to return to their homeland, east of Gaza City April 20, 2018. REUTERS/Mohammed Salem

GAZA (Reuters) – Israeli troops shot dead four Palestinians and wounded 12 in renewed unrest on the Gaza-Israel border on Friday as a series of mass protests in the enclave reached its half-way mark.

Some Palestinians brought wire-cutters to cut through the border fence. As the crowd grew, Israeli soldiers called out warnings in Arabic over loudspeakers to individuals who approached the border fence. 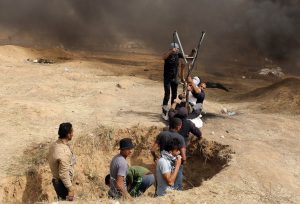 Demonstrators use a large slingshot to hurl stones during clashes with Israeli troops at a protest at the Israel-Gaza border where Palestinians demand the right to return to their homeland, east of Gaza City April 20, 2018. REUTERS/Mohammed Salem

Away from the border, Israeli-American Hollywood actress Natalie Portman announced she would not attend a ceremony in Israel to accept a million-dollar prize because of “distressing” events in the country.

The protests have been staged every Friday for the past month to push demands for Palestinian refugees to regain ancestral homes in what is now Israel. They are expected to culminate on May 15.

The Israeli military said that in the latest incident, about 3,000 Palestinians were rioting and tried to approach what it called security infrastructure. Troops responded “with riot dispersal means and are firing in accordance with the rules of engagement,” it said.

The use of live fire has drawn international criticism but Israel says it is protecting its borders and takes such action when protesters come too close to the border fence.

It accuses Hamas, the Islamist militant group which rules Gaza, of staging riots and trying to carry out attacks. Although the main protest campaign is intended to be peaceful, Gazans have hurled stones and burning tyres near the border fence. 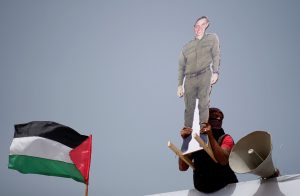 A Palestinian holds a dummy depicting an Israeli soldier during a protest at the Israel-Gaza border where Palestinians demand the right to return to their homeland, east of Gaza City April 20, 2018. REUTERS/Mohammed Salem

Some protesters on Friday fitted kites with cans of flammable liquids which they flew across the border to start fires in Israel.

“We aim to distract the soldiers from shooting and wounding or killing our people. Israeli soldiers will be worried those fire-kites may fall on their heads or torch bushes around them,” said Mohammad Abu Mustafa, 17, who lost his right leg a few months ago after being shot by an Israeli soldier.

“These kites also torch bushes and trees and not only cause them losses, but keep them busy trying to put out fires,” he said, leaning on crutches.

Early in the morning, the Israeli military used a new tactic, dropping leaflets into Gaza warning residents to not approach the border.

“The Hamas terror organization is taking advantage of you in order to carry out terror attacks. The IDF (Israel Defense Forces) is prepared for all scenarios. Stay away from the fence and do not attempt to harm it,” said the leaflets scattered by Israeli aircraft in areas along the border.

Hamas, which is sworn to Israel’s destruction, denies this.

More than 2 million Palestinians are packed into the narrow coastal enclave. Israel withdrew its troops and settlers from Gaza in 2005 but maintains tight control of its land and sea borders. Egypt also restricts movement in and out of Gaza on its border.

The protest campaign, dubbed The Great March of Return, is leading up to May 15, when Palestinians mark Nakba Day, or the Day of Catastrophe, commemorating their displacement around the time of Israel’s founding in 1948.

It takes place at a time of growing frustration over the prospects for an independent Palestinian state. Peace talks between Israel and the Palestinians have been stalled for several years and Israeli settlements in the occupied territories have expanded.

In an apparent sign of concern over the bloodshed on the border, the actress Natalie Portman, who was born in Jerusalem, said she would not attend a prize ceremony in Israel.

In a statement, the Genesis Prize Foundation quoted a representative for Portman as saying: “Recent events in Israel have been extremely distressing to her and she does not feel comfortable participating in any public events in Israel.”

It gave no further details of her reasons. But the foundation said it “admires her humanity, and respects her right to publicly disagree with the policies of the government of Israel”.

Israel’s culture minister, Miri Regev, suggested the actress was supporting the boycott, divestment and sanctions (BDS) movement, which aims to isolate Israel economically over its treatment of Palestinians. Israel sees the BDS movement as an attempt to delegitimise it.

The Genesis Prize is awarded to individuals for excellence in their professional fields and “who inspire others through their dedication to the Jewish community and Jewish values”.