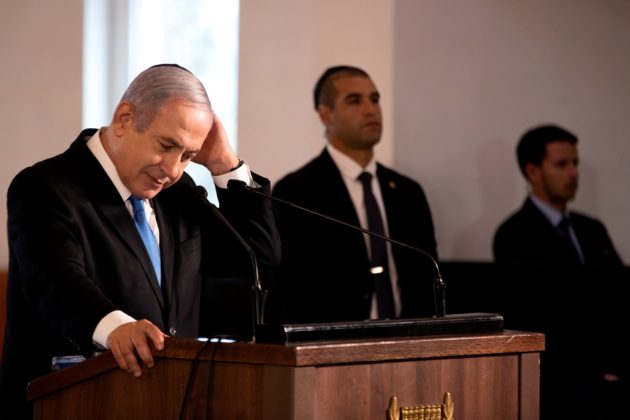 JERUSALEM (Reuters) – For the first time in a decade, someone other than Benjamin Netanyahu will be asked to form a government in Israel.

The 70-year-old prime minister has called two elections this year, has twice been given the chance by the president to put together a ruling coalition, and has twice failed.

But although he has failed, Gantz – a former general and political novice – also has no clear path to success.

Here are some of the possible scenarios, including even a third parliamentary election in less than a year, after two inconclusive elections in April and September.

WHY IS ISRAELI POLITICS IN DEADLOCK?

Shortly after the Sept. 17 election ended in stalemate, Rivlin gave Netanyahu 28 days to put together a governing coalition.

During that period, which expires on Wednesday, Israel’s longest-serving prime minister persuaded only 55 of parliament’s 120 members, including his traditional far-right and ultra-Orthodox Jewish allies, to join his right-wing Likud Party in a government.

Having fallen six seats short of a ruling majority, Netanyahu “returned” his mandate to the president, and a spokesman for Rivlin said Gantz would now get his chance.

One way out of the stalemate would be for the two largest parties, Likud and Gantz’s new Blue and White party, to form a “national unity” government.

Early talks centered on the possibility of a rotating premiership but led nowhere. Gantz, a former armed forces chief, refused to join a government led by Netanyahu, citing looming indictments against the prime minister in three corruption cases in which Netanyahu has denied any wrongdoing.

Gantz also said he wants a “liberal” government, shorthand for one that does not include Netanyahu’s religious partners.

HAS THIS HAPPENED BEFORE?

The last time anyone other than Netanyahu was asked to form a government in Israel was in 2008 when Tzipi Livni, of the now-defunct Kadima party, was given the chance and failed.

That led to an election in 2009 which was won by Netanyahu. Livni never returned to front-line politics, a precedent that is not lost on Netanyahu.

After receiving the formal nomination from Rivlin on Wednesday, Gantz will have 28 days to build a coalition. As things stand now, he has the endorsement of 54 lawmakers, seven short of a parliamentary majority.

But 10 of the those 54 legislators belong to a four-party Arab alliance. No party drawn from Israel’s 21% Arab minority has ever been invited to join an Israeli government or has sought to serve in one.

Without a deal with Netanyahu, Gantz could seek to form a minority government, with Arab lawmakers’ backing from the sidelines. But that is a big political risk in a country where Arab citizens’ loyalty has been hotly debated.

Arab lawmakers would be likely to face criticism from within their own community for propping up an Israeli government’s policies towards what many regard as their fellow Palestinians in the West Bank and Gaza.

AND IF GANTZ ALSO COMES UP SHORT?

A three-week period would ensue in which 61 lawmakers can ask the president to assign the coalition-building task to any legislator – Netanyahu, Gantz or another. If no such request is made in that time, parliament dissolves itself and an election is called – political pundits say March 17 is a possible date.

That could give Netanyahu another chance at the ballot box, barring a Likud rebellion against him.

WHAT ABOUT NETANYAHU’S LEGAL TROUBLES?

The deck could be reshuffled once Attorney-General Avichai Mandelblit announces whether he will follow through with his plan to indict Netanyahu in three graft investigations. His final decision is widely expected by the end of the year.

Netanyahu faces no legal requirement to leave government if indicted, but criminal charges against him – and their degree of severity – could further weaken him politically.

Netanyahu could face fraud and breach of trust charges in all three cases, and bribery charges in one.

ARE THERE ANY WILDCARDS?

He effectively prevented Netanyahu from building a ruling coalition after this year’s first election, boosted his standing in the second and could be a kingmaker in the third.