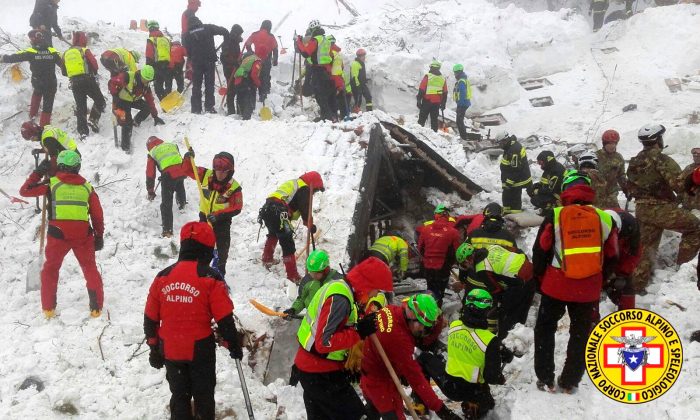 Rescue workers search around the Hotel Rigopiano in Farindola, central Italy, hit by an avalanche, in this undated picture released on January 22, 2017 provided by Alpine and Speleological Rescue Team. Soccorso Alpino Speleologico Lazio/Handout via REUTERS

PENNE, Italy (Reuters) – Rescuers dug in the buried ruins of a mountainside hotel in central Italy for a fifth day running on Monday, as questions multiplied over the initial response to last week’s blizzards and deadly avalanche.

Eleven people survived the Jan. 18 disaster in the Gran Sasso national park, including four children who were extracted from under tonnes of snow and debris on Friday. Six bodies have been recovered and a further 23 people are still missing.

Video footage showed one rescuer wriggling through a tiny hole cut in the concrete roof of the Hotel Rigopiano trying to find more possible survivors.

“We are working on the theory that the avalanche did not necessarily hit or destroy every room and that we haven’t yet reached the heart of the structure,” said Luca Cari, spokesman of the national fire brigades.

“We are continuing to explore the inside of the building in the hope of finding someone alive, although there is no certainty of this.”

Italian media published an email sent by the hotel manager on Jan. 18 to an array of local authorities, urging help to clear the access roads to enable the guests to escape after a series of powerful earthquakes had rattled the region.

“The clients have been terrorized by the tremors,” said the email. However, no help came before the avalanche struck, with local authorities saying that their most powerful snow plow had broken down and they did not have the money to repair it.

“The snow plow had been in for repairs for months”, said Luigi Di Maio, a leading light in the opposition 5-Star Movement, who accused the government of depriving local provinces of vital funds.

The government has promised to review its emergency response apparatus in the wake of the disaster. A court in nearby Pescara has opened an investigation into the tragedy.

“The operator did not believe me,” said restaurant owner Quintino Marcella, who had called for help after one of his employees telephoned from the obliterated hotel.

Italian media said the emergency services had contacted the hotel’s owner to see if he could confirm the avalanche. He reportedly said he knew nothing about it, but the operators were apparently unaware that he was not actually there.

As a result, the rescue operation only got into gear some 2-1/2 hours later, with the first rescue team arriving by ski 11 hours after the catastrophe because the roads were impassable.

Waiting nervously at a hospital in Pescara, the father of one man who was in the hotel accused authorities of wrongly telling him his son had been rescued along with his girlfriend.

Alessio Feniello said his son’s girlfriend had been pulled to safety and had told her rescuers that Stefano Feniello, 28, was still inside.

“If there was a thread of hope to rescue (my son), there isn’t any hope anymore,” he told reporters.