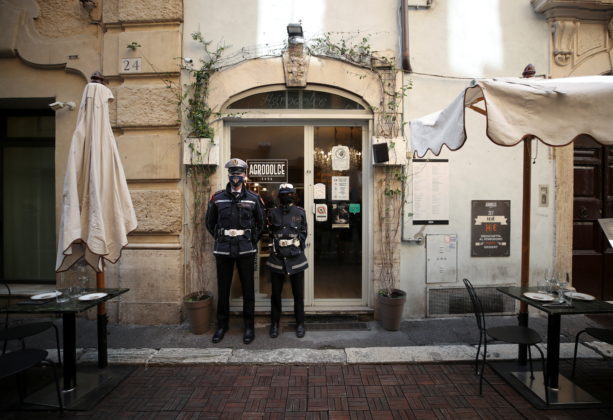 FILE PHOTO: Municipal police arrive to prevent the reopening of a restaurant near the Trevi fountain as part of a protest against coronavirus disease (COVID-19) restrictions, in Rome, Italy, April 7, 2021. REUTERS/Yara Nardi

ROME (Reuters) – Lockdown measures will be eased from Monday in six Italian regions, the health ministry ruled on Friday, even as the nationwide daily death toll remains well above 400.

New infections have fallen by 30% over the last five days compared with the same period last week, and the national health institute (ISS) said the “R” reproduction number has declined to 0.92 from 0.98 a week earlier. An “R” number above 1 indicates that infection numbers will grow at an exponential rate.

Italy operates a four-tier, color-coded system to calibrate the restrictions in place in its 20 regions.

Much of the industrial north worst-affected by the epidemic will be lowered from the highest-tier red, where people can only leave their homes for work, health reasons or emergencies, to tier-three orange, where restrictions on business and movement are slightly less severe.

This includes Lombardy, around the financial capital Milan, and Piedmont centered on Turin. Central Tuscany also passes from red to orange, while the island of Sardinia is the only region to move from orange to red.

A month ago Sardinia was the only region to be on the lowest-tier white, meaning daily life was almost as normal, underscoring the speed with which infections can accelerate in the absence of curbs.

Overall, from Monday there will be 16 orange regions and four red ones, with none in the two lower tiers, yellow and white.

The health system remains under acute strain and intensive care unit occupancy is still above the critical threshold, the ISS said, and daily deaths continue to pile up.

Friday saw the tally rise by 718, the largest increase this year, although the health minister said this figure was bloated by late reporting from the island of Sicily which had failed to register 258 deaths from “previous months.”

Italy has so far recorded 113,579 COVID-linked fatalities, the second-highest toll in Europe after Britain and the seventh-highest in the world.