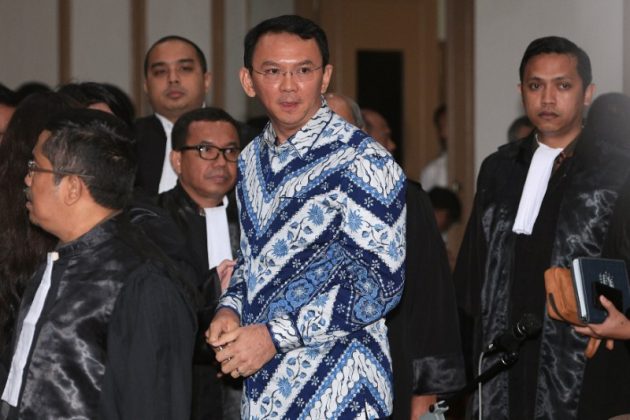 Jakarta Governor Basuki Tjahaja Purnama is seen inside a court during his trial for blasphemy in Jakarta, Indonesia May 9, 2017 in this photo taken by Antara Foto. Antara Foto/ Sigid Kurniawan/via REUTERS

By Fergus Jensen and Fransiska Nangoy

JAKARTA (Reuters) – Jakarta’s Christian governor was sentenced to two years in jail for blasphemy against Islam on Tuesday, a harsher than expected ruling that is being seen as a blow to religious tolerance in Indonesia, the world’s largest Muslim-majority nation.

The guilty verdict comes amid concern about the growing influence of Islamist groups, who organized mass demonstrations during a tumultuous election campaign that ended with Basuki Tjahaja Purnama losing his bid for another term as governor.

President Joko Widodo was an ally of Purnama, an ethnic-Chinese Christian who is popularly known as “Ahok”, and the verdict will be a setback for a government that has sought to quell radical groups and soothe investors’ concerns that the country’s secular values were at risk.

As thousands of supporters and opponents waited outside, the head judge of the Jakarta court, Dwiarso Budi Santiarto, said Purnama was “found to have legitimately and convincingly conducted a criminal act of blasphemy, and because of that we have imposed two years of imprisonment”.

Andreas Harsono of Human Rights Watch described the verdict as “a huge setback” for Indonesia’s record of tolerance and for minorities.

“If someone like Ahok, the governor of the capital, backed by the country’s largest political party, ally of the president, can be jailed on groundless accusations, what will others do?,” Harsono said. 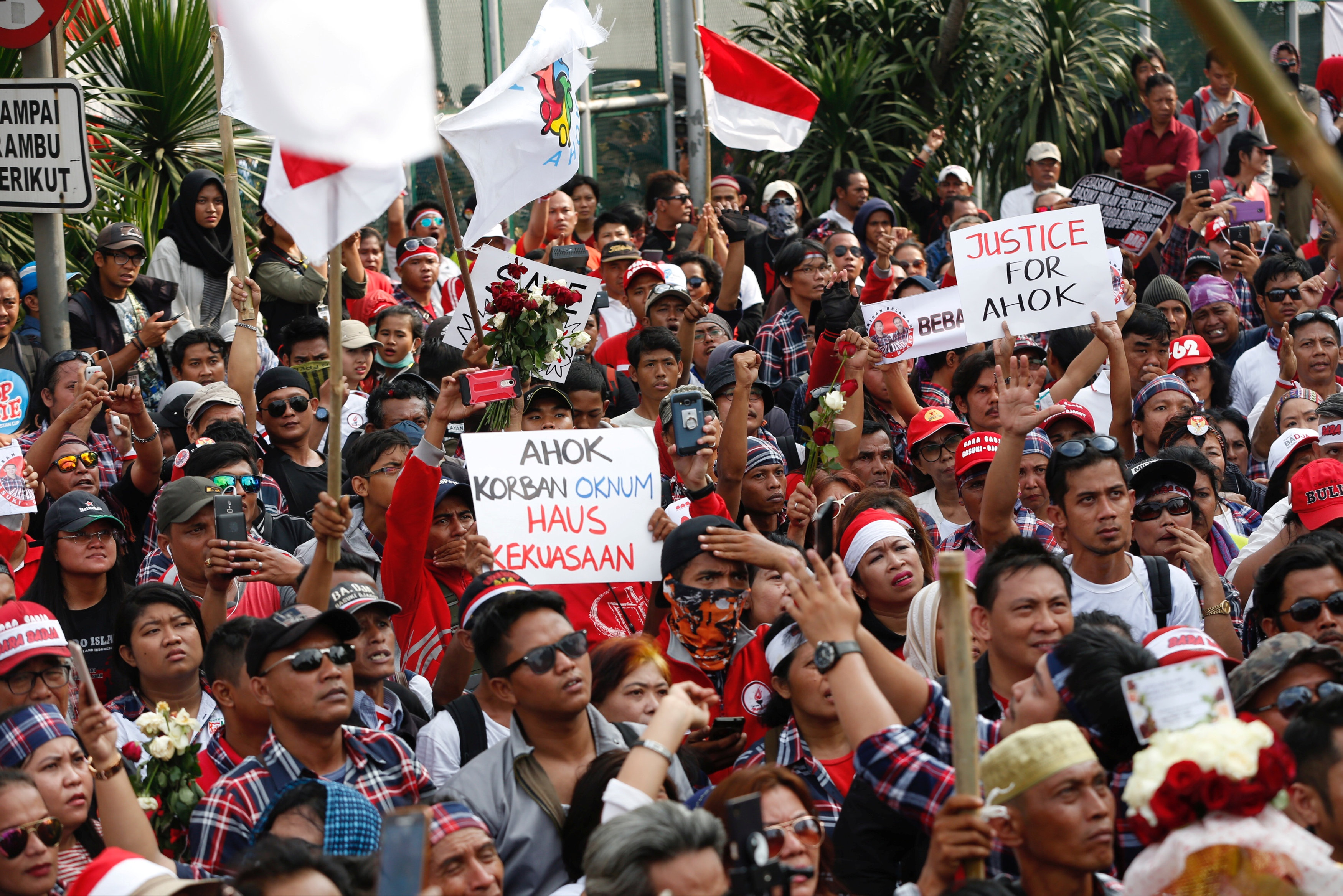 Supporters of Jakarta Governor Basuki Tjahaja Purnama, also known as Ahok, stage a protest outside Cipinang Prison, where he was taken following his conviction of blasphemy, in Jakarta, Indonesia May 9, 2017. REUTERS/Darren Whiteside

Purnama told the court he would appeal the ruling. The governor was taken to an East Jakarta prison after the verdict and his lawyer Tommy Sihotang said he would remain there despite his appeal process unless a higher court suspended it.

Shocked and angry supporters, some weeping openly, gathered outside the prison, vowing not to leave the area until he was released, while others vented their shock on social media.

Some lay down outside the jail blocking traffic, chanting “destroy FPI”, referring to the Islamic Defenders Front, a hardline group behind many of the protests against Purnama.

“They sentenced him because they were pressured by the masses. That is unfair,” Purnama supporter Andreas Budi said earlier outside the court.

Thousands of police were deployed in the capital in case clashes broke out, but there was no immediate sign of any violence after the court’s verdict.

Prosecutors had called for a suspended one-year jail sentence on charges of hate speech. The maximum sentence is four years in prison for hate speech and five years for blasphemy.

Hardline Islamist groups had called for the maximum penalty possible over comments by Purnama that they said were insulting to the Islamic holy book, the Koran.

While on a work trip last year, Purnama said political rivals were deceiving people by using a verse in the Koran to say Muslims should not be led by a non-Muslim.

An incorrectly subtitled video of his comments later went viral, helping spark huge demonstrations that ultimately resulted in him being bought to trial.

Purnama denied wrongdoing, though he apologized for the comments made to residents in an outlying Jakarta district. 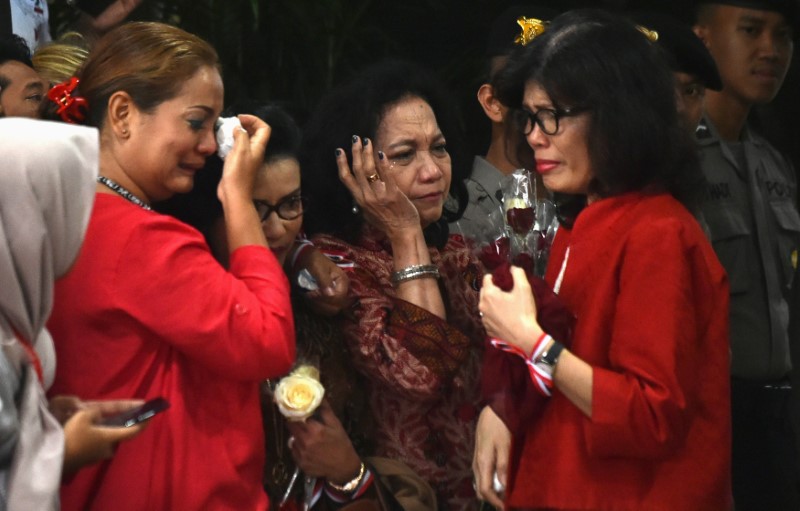 Supporters of Jakarta’s Christian governor Basuki Tjahaja Purnama, popularly known as Ahok, cry after he was sentenced following the guilty verdict in his blasphemy trial in Jakarta on May 9, 2017. REUTERS/Bay Ismoyo/Pool

Purnama lost his bid for re-election to a Muslim rival, Anies Baswedan, in an April run-off – after the most divisive and religiously charged election in recent years. He is due to hand over to Baswedan in October.

If Purnama’s appeals failed, he would be prevented from holding public office under Indonesian law because the offence carried a maximum penalty of five years, said Simon Butt of the Centre for Asian and Pacific Law at the University of Sydney.

Analysts say the radical Islamist groups that organized mass protests against Purnama had a decisive impact on the outcome of the gubernatorial election. 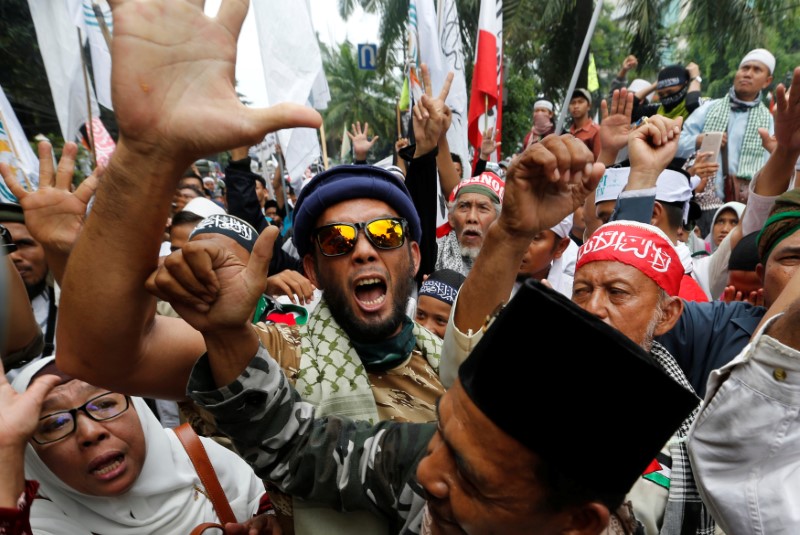 Rights group fear Islamist hardliners are in the ascendant in a country where most Muslims practise a moderate form of Islam and which is home to sizeable communities of Hindus, Christians, Buddhists, and people who adhere to traditional beliefs.

The government has been criticized for not doing enough to protect religious minorities but Widodo had urged restraint over the trial and called for all sides to respect the legal process.

His government said on Monday it would take legal steps to disband Hizb ut-Tahrir Indonesia (HTI), a group that seeks to establish an Islamic caliphate, because its activities were creating social tensions and threatening security.