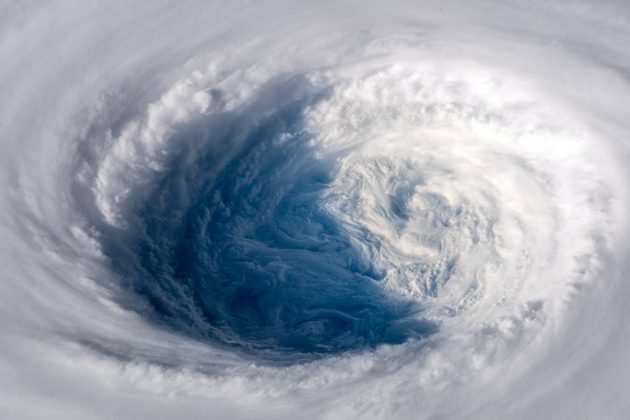 Super typhoon Trami is seen from the International Space Station as it moves in the direction of Japan, September 25, 2018 in this image obtained from social media on September 26, 2018. ESA/NASA-A.Gerst/via REUTERS

TOKYO (Reuters) – Japan braced for high winds and heavy rain as a typhoon roared north on Friday, enveloping outlying islands in high seas before taking aim at the rest of the nation and raking across its biggest main island at the weekend.

Typhoon Trami, rated category 2 by Tropical Storm Risk, with category 5 the highest, is the latest storm to threaten Japan in a year filled with more than the usual number of disasters, including punishing heat, heavy rains, and landslides.

Less than a month ago, a typhoon flooded Kansai International airport near Osaka, leaving thousands of tourists stranded.

Outlying islands in the Okinawan chain, some 1,000 km southwest of Tokyo, were being pounded by heavy seas and strong winds, just two days before an Okinawan gubernatorial election, forcing some areas to hold voting early. The central government set up an emergency office to deal with the storm.

Churning north across Okinawa on Saturday, Trami is then predicted to rake across the islands of Kyushu and the main island of Honshu on Sunday, a path similar to that taken by typhoon Jebi early in September.

Though the Japanese capital of Tokyo is set for heavy rain, current predictions show it avoiding a direct hit.

Jebi, the most powerful storm to hit Japan in 25 years, brought some of the highest tides since a 1961 typhoon and flooded Kansai airport near Osaka, taking it out of service for days.

Seventeen people died in the storm, whose high winds sent trees crashing to the ground and cars scudding across parking lots.

Even for a nation accustomed to disasters, this year has been hard for Japan, starting with a volcanic eruption in January that rained rocks down on a ski resort, killing one.

July brought record-breaking heat that killed at least 80 people and sent over 20,000 to the hospital for treatment, along with torrential rains in western Japan that set off floods and landslides, killing more than 200.

Just two days after Jebi hit in September, the northernmost main island of Hokkaido was rocked by an earthquake that set off landslides, knocked out power throughout the island and killed at least 44 people.