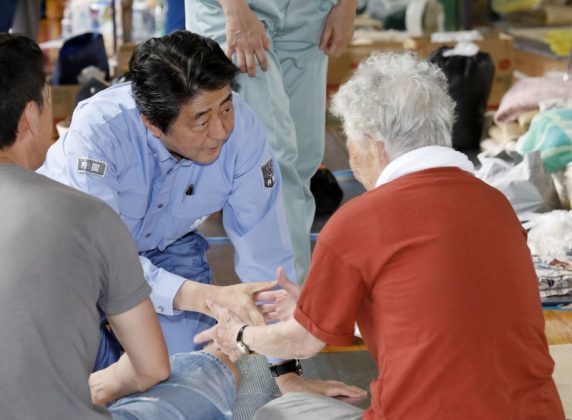 By Kiyoshi Takenaka and Issei Kato

KUMANO, Japan (Reuters) – Prime Minister Shinzo Abe visited flood-stricken parts of Japan on Wednesday as the death toll from the worst weather disaster in 36 years reached 176 and health concerns rose amid scorching heat and the threat of new floods.

At least 176 people were killed, the government said, with dozens missing in Japan’s worst weather disaster since 1982. 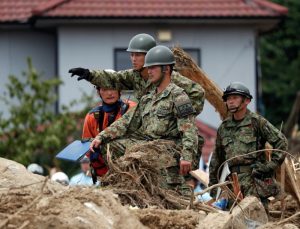 In Kumano, a mountainside community in Hiroshima prefecture that was hit by a landslide last week, Ken Kirioka anxiously watched rescuers toiling through mud, sand and smashed houses to find the missing, including his 76-year-old father, Katsuharu.

“He is old and has a heart condition. I prepared myself for the worst when I heard about the landslide on Friday night,” he said, pointing at a pile of mud and rubble where he said his father was buried.

“He is an old-fashioned father who is hard-headed and does not talk much,” Kirioka said, adding he would stay until his father was found. “It would be too bad for him if a family member were not around”.

Rescuers working under a scorching sun combed through heaps of wood and thickly caked mud in a search for bodies, helped by sniffer dogs. In some cases only the foundation of homes remained as they cut through debris with chain saws.

With temperatures of 33 degrees Celsius (91 degrees Fahrenheit) or higher in the devastated areas in Okayama and Hiroshima prefectures, attention turned to preventing heat-stroke among rescue workers and in evacuation centers where thousands of people have sought shelter.

People sat on thin mats on a gymnasium floor in one center, plastic bags of belongings piled around them and bedding folded off to the side. Portable fans turned slowly as children cried. 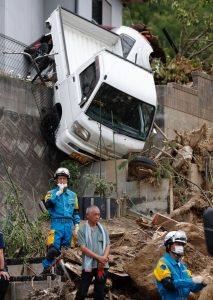 Abe, who canceled an overseas trip to deal with the disaster, was criticized after a photograph posted on Twitter showed Abe and his defense minister at a party with lawmakers just as the rains intensified.

After observing the damage from a helicopter flying over Okayama, one of the hardest-hit areas, Abe visited a crowded evacuation center. He crouched down on the floor to speak with people, many of them elderly, and asked about their health. He clasped one man’s hands as they spoke.

Later he told reporters the government would do everything it could to help the survivors.

“We’ll cut through all the bureaucracy to secure the goods people need for their lives, to improve life in the evacuation centers – such as air conditioners as the hot days continue – and then secure temporary housing and the other things people need to rebuild their lives,” he said.

Abe is up for re-election as party leader in September and has seen his popularity ratings edge back up after taking a hit over a cronyism scandal earlier this year.

His government pledged an initial $4 billion toward recovery on Tuesday, and a later special budget if needed.

Officials turned to social media to warn of the additional danger of food-borne illnesses, urging people to wash their hands and take other measures against food poisoning.

Evacuation orders were issued for 25 households in the city of Fukuyama after cracks were found in a reservoir.

The intensifying heat was expected to trigger thunderstorms on Wednesday, with authorities warning new landslides could be set off on mountainsides saturated with water.

Japanese media on Wednesday focused on the timing of evacuation orders issued in the hard-hit Mabi district of Kurashiki city just minutes before a levee broke and water poured into the residential area.

A number of the dead in Mabi were found in their homes, suggesting they did not have enough time to flee, media reports said.