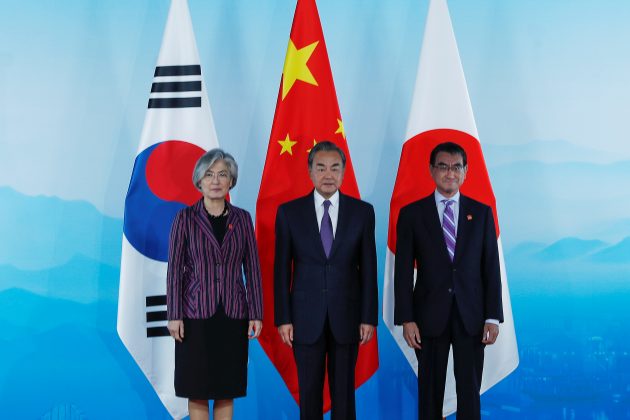 By Hyonhee Shin and Ami Miyazaki

TOKYO/SEOUL (Reuters) – Japan and South Korea on Wednesday agreed on the need for dialogue to resolve a feud over compensating Korean wartime workers that has spilled into trade and put a deep chill on ties between Washington’s two biggest Asian allies.

Japanese Foreign Minister Taro Kono, speaking after talks with South Korean counterpart Kang Kyung-wha, said both sides shared that view over the dispute, which is a bitter legacy of Japan’s 1910-1945 colonization of the Korean peninsula.

“In that sense, I want to firmly make progress towards resolving (this matter),” Kono said outside the Chinese capital of Beijing, in comments carried live on Japanese public broadcaster NHK.

“I think the fact that we … were able to talk in this difficult situation could lead to big progress towards resolving this problem,” Kono said. “I want to stay in close touch and continue to talk.”

A South Korean official said both sides reiterated their positions but the meeting was meaningful in restoring diplomatic dialogue and reaffirming the need to keep talking, South Korea’s Yonhap news agency said.

Relations soured after the South Korean Supreme Court ordered some Japanese firms to compensate Korean wartime workers last October, a move strongly condemned by Tokyo, which says the matter was resolved by a 1965 treaty normalizing ties.

The feud has spilled over into trade, after Japan tightened export controls on materials vital to South Korean chipmakers and then dropped Seoul from a list of countries eligible for fast-track exports, prompting South Korea to take a similar step towards Japan.

The number of South Korean tourists visiting Japan fell last month to its lowest in nearly a year, amid a far-reaching boycott of Japanese products and services, from cars to beer and tours.

Kono also said Japan wanted Seoul and Tokyo to maintain a military intelligence-sharing pact that could expire if South Korea decides not to roll it over this week.

“This is an important framework for the United States, Japan and South Korea and … should be maintained,” Kono said, adding that he had discussed the intelligence pact with Kang.

Though Kang declined to comment after the meeting whether South Korea would renew the deal, Kim Sang-jo, policy chief of President Moon Jae-in, said on Wednesday that Seoul would continue consideration “until the last minute”.

Kono urged both China and South Korea to scrap their import curbs on produce from areas around Japan’s Fukushima nuclear disaster site, where three reactors suffered melt downs after an earthquake and tsunami in 2011.

Seoul said on Wednesday it would double radiation testing of some Japanese food imports, for fear of contamination from the Fukushima plant.

An official of Japan’s Ministry of Agriculture, Forestry and Fisheries said Japanese food products were safe and increased radiation testing was unnecessary.