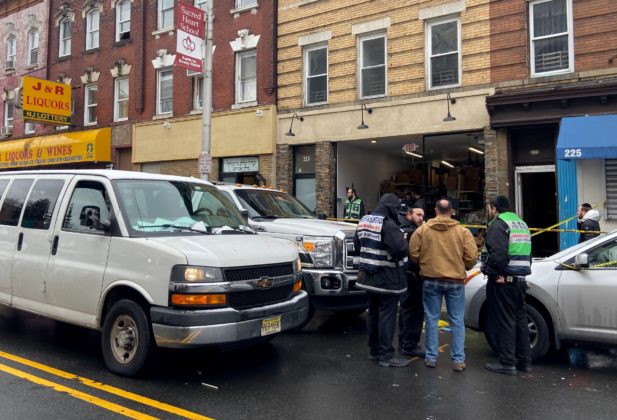 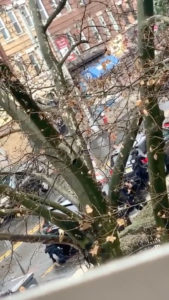 Police officers use vehicles for protection during a shootout in Jersey City, New Jersey, U.S. December 10, 2019 in this still image obtained from a social media video. @GABRIELANGELVALLE /via REUTERS

The four-hour gun battle at the Jewish JC Kosher Supermarket erupted after the pair shot the police officer at a nearby cemetery, which they fled in a white van.

“They exited the van and they proceeded to attack this location in a targeted manner,” Jersey City Public Safety Director James Shea told a morning news conference. “With the amount of ammunition they had, we have to assume they would have continued attacking human beings if we hadn’t been there.”

He did not comment on why the grocery was targeted but said the shooters appeared to choose it rather than other people or locations on the street. Police declined to release the names or genders of the shooters.

The New York Times reported that a suspect involved in the shooting had posted anti-Semitic and anti-police messages online and cited law enforcement officials as saying investigators believed the attack was motivated by those sentiments.

Jersey City officials were not immediately available for comment.

“Due to an excess of caution the community may see additional police resources in the days/weeks ahead,” Fulop wrote. “We have no indication there are any further threat(s).”

New York City Mayor Bill de Blasio tweeted that while there was no known specific threat to that city, he had placed city police on high alert to protect Jewish residents.

“Tonight NYPD assets are being deployed to protect key locations in the Jewish community,” he said late Tuesday.

Police had said earlier on Tuesday they believed the kosher grocery was randomly singled out by the shooters.

Some local media reported the initial confrontation between the suspects and police near the Jersey City cemetery, about a mile away from the supermarket, was linked to a previous homicide investigation.

The dead police officer was shot at the cemetery shortly before the shootout around the grocery began.

(Reporting by Maria Caspani and Barbara Goldberg in New York and Rich McKay in Atlanta; Editing by Scott Malone and Steve Orlofsky)