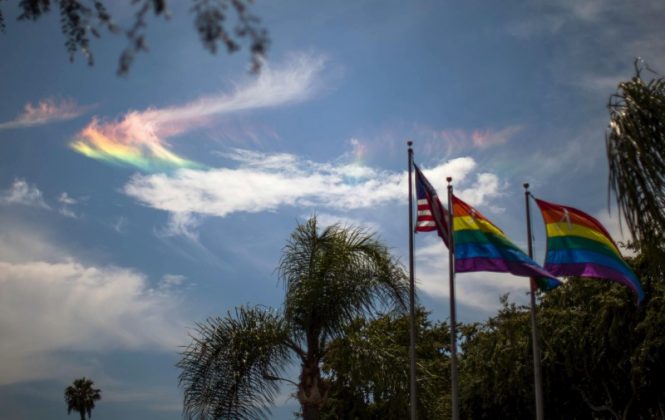 A rainbow is seen in the sky behind LGBT pride flags and the U.S. flag in West Hollywood, California, United States, June 26, 2015. REUTERS/Lucy Nicholson

(Reuters) – A day before it was due to come into effect, a federal judge has blocked a Mississippi law permitting those with religious objections to deny wedding services to same-sex couples and impose dress and bathroom restrictions on transgender people.

Mississippi is among a handful of southern U.S. states on the front lines of legal battles over equality, privacy and religious freedom after the U.S. Supreme Court last year legalized same-sex marriage.

U.S. District Judge Carlton Reeves found on Thursday the wide-ranging law adopted this spring unconstitutionally discriminated against lesbian, gay, bisexual and transgender people and others who do not share the view that marriage is between a man and a woman.

Reeves issued an injunction blocking the law that was to take effect on Friday.

He agreed with opponents of the law who argued that it violated the U.S. Constitution’s prohibition on making laws that establish religion.

Mississippi’s “Protecting Freedom of Conscience from Government Discrimination Act” shields those believing that marriage involves a man and a woman, and sexual relations should occur within such marriages. It protects the belief that gender is defined by sex at birth.

The law allows people to refuse to provide wide-ranging services by citing the religious grounds, from baking a wedding cake for a same-sex couple to counseling and fertility services. It would also permit dress code and bathroom restrictions to be imposed on transgender people.

The law “does not honor that tradition of religion freedom, nor does it respect the equal dignity of all of Mississippi’s citizens,” Reeves wrote in his decision.

Mississippi Governor Phil Bryant, a Republican, in April signed the measure into law. The state has defended it as a reasonable accommodation intended to protect businesses and individuals seeking to exercise their religious views.

His staff was unavailable for comment early on Friday.

Critics say the Mississippi law is so broad that it could apply to nearly anyone in a sexual relationship outside of heterosexual marriage, including single mothers. Several lawsuits have challenged various aspects of the law.

Earlier this week, Reeves addressed a provision allowing clerks to recuse themselves from issuing marriage licenses to gay couples based on religious beliefs, saying they had to fulfill their duties under the Supreme Court ruling.

His ruling on Thursday came after religious leaders, including an Episcopal vicar and a Jewish rabbi, last week testified in U.S. District Court for the Southern District of Mississippi that the law did not reflect their religious views. He also heard about its harmful potential from members of the gay community.

“I am grateful that the court has blocked this divisive law. As a member of the LGBT community and as minister of the Gospel, I am thankful that justice prevailed,” said Rev. Susan Hrostowski, an Episcopal priest who is a plaintiff in the case.

(Reporting by Brendan O’Brien in Milwaukee; Editing by Toby Chopra)