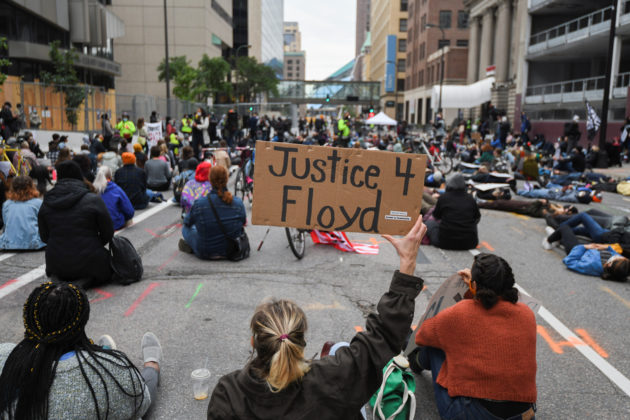 Protesters gather outside of the Hennepin County Family Justice Center while a court hearing on the case for the death of George Floyd proceeds inside, in Minneapolis, Minnesota, U.S., September 11, 2020. REUTERS/Nicholas Pfosi

(Reuters) – All four former Minneapolis police officers charged in the death of George Floyd appeared in court on Friday, with the prosecution arguing their trials should be combined and the judge weighing a request to move the cases outside the city.

Derek Chauvin, who faces the most serious accusations, was wearing a gray suit and dark shirt and tie for his first in-person court appearance since he was charged with murder for kneeling on Floyd’s neck for about nine minutes on May 25.

Chauvin, who is white, was not shackled and appeared thinner than in the bystander videos that captured the incident, according to a media pool report. His hair was cut short and he wore a blue surgical mask due to the novel coronavirus.

The death of Floyd, who was Black, sparked worldwide protests against racism and calls for police reforms nationwide that are still ongoing, reignited in recent weeks by incidents in Kenosha, Wisconsin, and Rochester, New York.

About 100 protesters had gathered outside the heavily fortified Family Justice Center, chanting “Black Lives Matter” and “no justice, no peace” as the hearing, which started at 9 a.m. CDT (10 a.m. EDT), got underway inside.

The other three former officers on the scene – J. Alexander Kueng, Thomas Lane and Tou Thao – are charged with aiding and abetting Floyd’s murder. Kueng, Lane and Thao all appeared in court wearing dark suits, according to the pool report.

All four men oppose a motion by prosecutors to consolidate their cases into one trial.

Assistant Attorney General Matthew Frank said in court the cases should be combined, arguing that separate trials could delay justice for years and would traumatize Floyd’s family, according to KARE 11 reporter Lou Raguse.

Addressing the request by all four defendants to move their trials outside of Minneapolis due to concerns about pretrial publicity, Hennepin County District Court Judge Peter Cahill said he believed a questionnaire would need to be sent to potential jurors to see how they have been affected by the publicity around the case, Raguse wrote on Twitter.

(Reporting by Nick Pfosi in Minneapolis and Nathan Layne in Wilton, Connecticut; Editing by Steve Orlofsky)