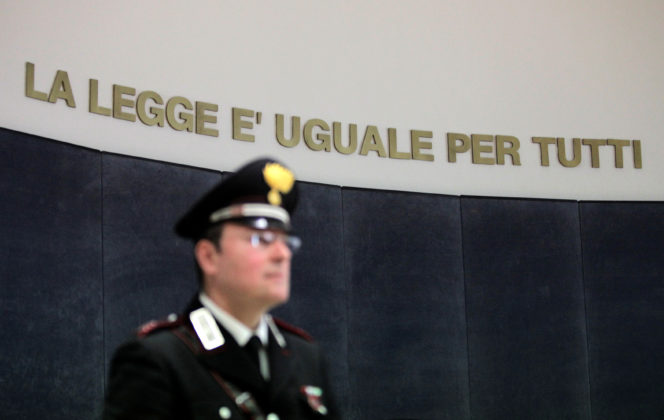 FILE PHOTO: An Italian Carabinieri official stands an Italian courtroom during the Mills trial in Milan's court March 11, 2011. The words on the wall reads "The law is equal for everybody". REUTERS/Alessandro Garofalo

ROME (Reuters) – A judge on Thursday indicted 444 suspected members of the ‘Ndrangheta mafia on an array of charges, including murder, attempted murder, extortion, money laundering and drug trafficking, a judicial source said.

The trial of 355 of the defendants will start on Jan. 13 and will be one of the largest cases to target organized crime in Italy since the so-called maxiprocesso that severely weakened Sicily’s more storied Cosa Nostra mafia group in the 1980s.

A further 89 suspects agreed to a quickfire trial in the same case, which will start on Jan. 27, said the source, speaking on condition of anonymity, who had a copy of the court indictments. Those who accept such shorter hearings get reduced sentences if found guilty.

The ‘Ndrangheta is based in the southern region of Calabria, the toe of Italy’s boot, and has surpassed Cosa Nostra to become the most powerful mafia group in the country – and one of the largest crime gangs in the world.

Anticipating Thursday’s ruling, a fortified courthouse has been built in the Calabrian city of Lamezia Terme, large enough to house the defendants, lawyers, prosecutors and judges.

The case hit the headlines a year ago when police arrested 334 people, including lawyers, accountants, public officials and court clerks, in one of the largest anti-mob operations ever seen in Italy.

“Obviously mafias change and evolve along with the society around them and they get to look increasingly like the rest of us. Mafiosi are not Martians, they live among us,” Nicola Gratteri, the lead prosecutor on the case, said this week.

“Mafiosi prefer corrupting people rather than killing them, because shootings draw unwelcome attention,” he added.

The last time Italy tried hundreds of alleged mafiosi simultaneously was in 1986 in Palermo in a case which represented a turning point in the fight against Cosa Nostra, marking the beginning of the group’s sharp decline.

The Calabrian trial involves a high number of white-collared workers and does not target the top hierarchies of the ‘Ndrangheta clans in the way the Palermo case did.

Gratteri told reporters that the group had spread far from its remote southern bastion and was present in every region of the country as well as in parts of Europe and north America.

He said it had grown easier for mobsters to infiltrate local administrations and win lucrative contracts or siphon off funds.

“There has been a sharp fall in ethics and morals (in society) in recent years … which has made it easier to corrupt public officials. This doesn’t just involve Italy. It involves the Western world,” he said.