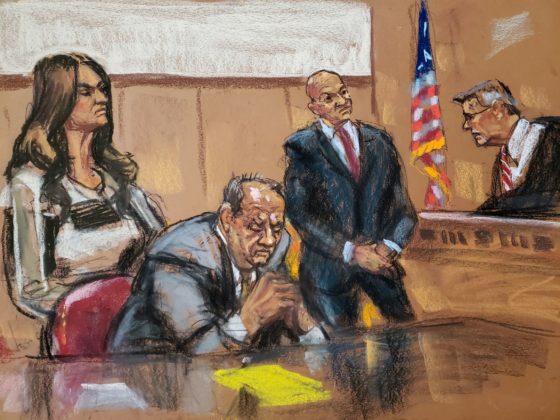 NEW YORK (Reuters) – Harvey Weinstein’s rape trial took a dramatic turn on Tuesday as the judge threatened to revoke his bail and jail the former film producer after catching him using his cellphone just as jury selection got underway.

“Is this really the way you want to end up in jail for the rest of your life, by texting and violating a court order?” state Judge James Burke asked the 67-year-old defendant, visibly angry.

The once-powerful producer has been released on bail, but is required to wear an electronic-tracking device that was visible on his ankle when he arrived at court on Tuesday.

Weinstein has pleaded not guilty to charges of assaulting two women in New York. He faces life in prison if convicted on the most serious charge, predatory sexual assault.

Jury selection began with Burke speaking to 120 potential jurors in the courtroom about the importance of jury service and telling them the identity of the defendant.

“Having heard of him, or even having heard the allegations made against him in the press, does not disqualify you,” he told them.

Burke read to jurors a list of dozens of names that might come up at the trial, including actresses Salma Hayek and Charlize Theron, who have accused Weinstein of misconduct.

He also mentioned actress Alyssa Milano. Days after reports of Weinstein’s alleged misconduct was first reported in October 2017, Milano wrote on Twitter “If you’ve been sexually harassed or assaulted write ‘me too’ as a reply to this tweet.”

That message propelled the #MeToo movement, which prompted women to lodge misconduct allegations against powerful men in politics and business.

Burke did not say if the people he mentioned would be called as witnesses.

Prosecutors have said they may call three women to testify about encounters with Weinstein, even though he is not formally charged with crimes against them. Their testimony is intended to bolster the charges by showing that Weinstein had a consistent pattern of behavior.

Michelle Gelernt, a public defender who briefly represented Mexican drug lord Joaquin “El Chapo” Guzman, raised her had when asked if anyone knew the legal teams. She said she knew the judge and lead prosecutor but it would not prevent her from being impartial.

Forty potential jurors were excused after saying they could not be impartial, and a small number said their health prevented them from serving.

Those who said they believed serving on the jury would be a hardship were called one by one to speak with the judge and lawyers privately.

The remaining jurors were told to take a written questionnaire and return on Jan. 16 for further selection if they believed they were able to serve.

More than 80 women have accused Weinstein of sexual misconduct dating back decades.

Weinstein has denied the allegations, saying any sexual encounters he had were consensual.

Burke denied a request by one of Weinstein’s lawyers, Arthur Aidala, to delay the trial or at least allow more time for jury selection because Monday’s charges would make it impossible to choose a fair and impartial jury this week.

“I cannot think of one time, one case where the day of jury selection this type of prejudice is being cast against a criminal defendant,” said Aidala, who held up copies of the New York Times, Daily News and New York Post with articles about the Los Angeles charges.

“I don’t see how anyone could answer honestly that they’re fair and impartial after this stuff is drilled into their brains,” he said.

Legal experts said the #MeToo movement and Monday’s charges would make jury selection challenging in the trial of Weinstein, who made his mark with low-budget, critically acclaimed films such as “The English Patient” and “Shakespeare in Love.”

“The defendant, Harvey Weinstein is a film producer,” stated the form with 55 questions potential jurors were asked to answer. “Can you assure all parties that you will determine this case based only on the evidence you will hear in Court?”

Lucian Chalfen, a spokesman for the Office of Court Administration, said the 2,000 jurors summoned for the Weinstein case is roughly five times the number for a typical trial. Based on past experience, about 500 were likely to show up for jury duty.

Prosecutors need all 12 jurors to back a conviction, while Weinstein needs just one holdout for a hung jury.