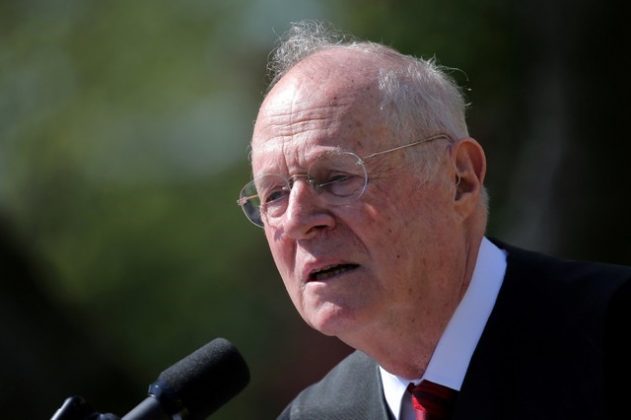 FILE PHOTO: Supreme Court Associate Justice Anthony Kennedy speaks during a swearing in ceremony for Judge Neil Gorsuch as an associate justice of the Supreme Court in the Rose Garden of the White House in Washington, DC, U.S., April 10, 2017. REUTERS/Carlos Barria/File Photo

WASHINGTON (Reuters) – U.S. Supreme Court Justice Anthony Kennedy’s retirement, announced on Wednesday, could put some of his signature rulings in jeopardy, including ones that expanded or preserved gay rights and abortion rights.

Kennedy is a conservative, but he joined the court’s four liberals to cast deciding votes on several key social issues, most notably on gay marriage.

His successor will be picked by President Donald Trump from a White House list of 25 names recommended by conservative legal activists, and the new justice is likely to take a less liberal tack than Kennedy did on at least some issues. If so, he or she will provide a fifth vote for the court’s conservatives rather than its liberals – and over time reshape the U.S. legal landscape.

“It’s extremely likely President Trump is going to appoint someone who is not going to follow Justice Kennedy’s lead in those cases and will go even further in undermining constitutional rights and degrading the rule of law,” said Elizabeth Wydra, president of the liberal leaning Constitutional Accountability Center.

Without Kennedy, she said, the court would have overturned Roe v. Wade, the 1973 case establishing a woman’s right to abortion. It would also have prevented gay people from marrying and ended university admissions programs that take race into account, she said.

New cases on gay rights and abortion could reach the high court in short order.

Legal battles are already developing over newly enacted laws restricting abortion, including one in Arkansas that effectively bans medication abortions. The Supreme Court opted not to intervene in a case challenging that law in May, saying it would wait for lower courts to rule, but the issue is likely to return to the court in coming years.

“Justice Kennedy’s retirement from the Supreme Court marks a pivotal moment for the fight to ensure every unborn child is welcomed and protected,” said Marjorie Dannenfelser, president of pro-life group Susan B. Anthony List.

She noted that Trump has previously pledged “to nominate only pro-life judges to the Supreme Court.”

Another live issue expected to come back to the court is whether people who run businesses can refuse service to gay couples because of religious objections to same-sex marriage.

In an opinion this year by Kennedy in a case involving a Colorado bakery, the court on a 7-2 vote ruled narrowly on the issue, but it punted on the larger question of whether to allow religious-based exemptions to anti-discrimination laws. That issue could be back before the justices as soon as the court’s next term, which starts in October, in a case involving a Christian florist

Gay rights activists, while praising Kennedy’s votes, expressed alarm about his departure from the bench.

“The Supreme Court has done a lot to change the position of LGBT people in America, but there are big open questions the court may well weigh in on in the future, so there’s a lot at stake,” said James Esseks, a lawyer with the American Civil Liberties Union who works on gay rights cases.

Esseks said he is hopeful the new justice will embrace recent legal victories in gay rights battles and urged senators to press the nominee on the issue during the confirmation process after Trump announces his pick.

“The significance of today’s news cannot be overstated: The right to access abortion in this country is on the line,” said Dawn Laguens, the group’s executive vice president.