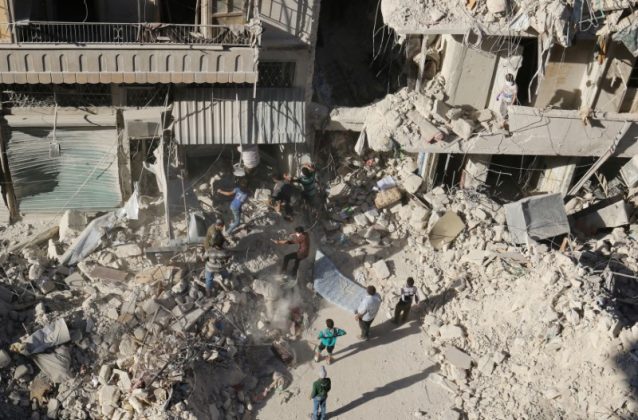 People dig in the rubble in an ongoing search for survivors at a site hit previously by an airstrike in the rebel-held Tariq al-Bab neighborhood of Aleppo, Syria, September 26, 2016. REUTERS/Abdalrhman Ismail

By Patricia Zengerle and Lisa Barrington

CARTAGENA, Colombia/BEIRUT (Reuters) – U.S. Secretary of State John Kerry defended his efforts to negotiate with Moscow over the war in Syria on Monday, despite the collapse of a ceasefire that has led to a massive Russian-backed assault on the besieged rebel-held sector of Aleppo.

Medical supplies were running out in eastern Aleppo, with victims pouring into barely functioning hospitals as Russia and its ally President Bashar al-Assad ignored Western pleas to stop the bombing of the last major urban area in opposition hands.

Moscow and Damascus launched their assault last week despite months of negotiations led by Kerry that resulted in a short-lived ceasefire this month. The secretary of state’s diplomatic overtures to Moscow had faced scepticism, including from other senior officials within the U.S. administration.

Kerry said his failed ceasefire was not the cause of the fighting, and the only way to stop the war was to talk. He lashed back at critics, including Republican senator John McCain, who described him last week as “intrepid but delusional” for putting too much faith in Russia.

“The cause of what is happening is Assad and Russia wanting to pursue a military victory,” Kerry told reporters during a trip to Colombia. “Today there is no ceasefire and we’re not talking to them right now. And what’s happening? The place is being utterly destroyed. That’s not delusional. That’s a fact.”

The Syrian government offensive to recapture all of Aleppo, with Russian air support and Iranian help on the ground, has been accompanied by bombing that residents describe as unprecedented in its ferocity.

Some 250,000 civilians remain trapped in the besieged, opposition-held sector of Syria’s biggest city. Hundreds of people, including dozens of children, have been reported killed since Thursday night by an onslaught that includes bunker-busting bombs that bring down whole buildings.

In a tense confrontation at the United Nations over the weekend, the United States called Russia’s bombing in support of Assad “barbarism”, and said Russia was killing civilians, medical staff and aid workers.

Moscow and Damascus say they are bombing only militants, although video from Aleppo has repeatedly shown small children being dug out of the rubble of collapsed buildings.

Inside the rebel-held sector of what was once Syria’s largest city, there are only about 30 doctors left, coping with scores of fresh wounded every day.

“Aleppo city’s hospitals are overwhelmed with wounded people … Things are starting to run out,” said Aref al-Aref, an intensive care medical worker, who spoke from Aleppo.

“We are unable to bring anything in … not equipment and not even medical staff. Some medical staff are in the countryside, unable to come in because of the siege,” he said.

“Now, there’s just the helicopter, and God only knows where it will bomb. God knows which building will collapse,” he said. “Everybody is scared … unable to go out. They don’t know what to do, or where to go.”

Russia and Assad appear to have abandoned diplomacy last week, betting instead on delivering a decisive military blow against the president’s enemies on the battlefield. Capturing rebel districts of Aleppo would be the biggest victory of the war so far for Assad, crushing the revolt in its last major urban stronghold.

Indicating there would be no respite soon, the Syrian army issued a statement reiterating its call for civilians to steer clear of rebel positions and bases in eastern Aleppo.

The Syrian Observatory for Human Rights, a monitoring body, says at least 237 people, including at least 38 children, have been killed in Aleppo and nearby countryside since the army declared the end of the ceasefire a week ago. Civil defense workers in opposition territory put the death toll at 400.

The rebel-held sector of Aleppo is completely encircled, making it impossible to receive supplies. The Syrian American Medical Society (SAMS) charity group said this week in a statement that only 30 doctors remained inside.

“We have patients who will die in the dozens if they are not evacuated,” Osama Abo Ezz, a general surgeon and Aleppo coordinator for SAMS, told Reuters, speaking from an area near Aleppo.

Residents say the air strikes are using more powerful bombs than ever. A Syrian military source told Reuters on Saturday that weapons were being used that could destroy rebel tunnels and bunkers, dug out during years of opposition control.

A water pumping station serving eastern Aleppo has been destroyed. A spokesman for the World Health Organisation said a technical mission was visiting it to assess damage.

“We don’t know how long it will take to restore the functionality,” said the spokesman, Tarik Jasarevic.

Rescue efforts during the bombing have been hampered because damage has made roads impassable and because civil defense centers and rescue equipment have themselves been struck.

Hundreds of thousands of people have been killed in the civil war between Assad’s government and insurgents, and 11 million driven from their homes. Much of the east of the country is now in the hands of Islamic State fighters, the enemies of all other sides.

Since Russia joined the war a year ago to support Assad’s government, the administration of President Barack Obama has been engaged in intensive diplomacy with Moscow, trying to end the war between the government and most insurgent groups and turn the focus toward the common fight against Islamic State.

But the latest escalation has left U.S. Syria policy in tatters, all but destroying any hope of a breakthrough before Obama leaves office next year.

The Kremlin said on Monday tough Western condemnation might hinder any resolution to the crisis. Moscow saw “absolutely no prospect” for holding a summit on Syria, Kremlin spokesman Dmitry Peskov said. Moscow blames Washington for the failure of the ceasefire, arguing that the United States failed to prevent rebels from using the truce to regroup.