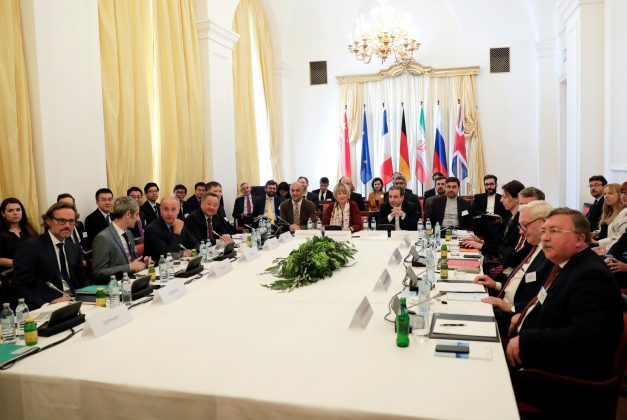 By John Irish and Francois Murphy

VIENNA (Reuters) – Last-ditch talks to persuade Tehran not to exceed nuclear limits within days were on course for failure on Friday, as Iranian officials said their demands had not been met and Washington rebuffed European calls to ease sanctions to allow negotiations.

A week after Washington called off air strikes just minutes before impact, diplomats say Iran is on course within days to exceed the threshold of enriched uranium allowed under its nuclear deal with world powers, which Washington quit last year.

Any such move would reshape the diplomatic landscape, at a time when European officials are warning that a small mistake on either side could push the United States and Iran to war.

Iranian officials met in Vienna with representatives of the countries that are still party to the nuclear deal — Britain, France, Germany, Russia and China. The Iranians repeated their demand that they be allowed to sell oil.

The talks were a “last chance for the remaining parties … to gather and see how they can meet their commitments towards Iran,” Foreign Ministry spokesman Abbas Mousavi said.

Despite abandoning the deal, Washington has demanded European countries force Iran to continue complying with it. Iran says it cannot do so unless the Europeans provide it with some way to receive the deal’s promised economic benefits.

“For one year we exercised patience. Now it is the Europeans’ turn to exercise patience,” Mousavi said. “They should try to find solutions, practical solutions.”

French President Emmanuel Macron said this week that he would ask U.S. President Donald Trump to ease sanctions to allow negotiations to begin. But the plea seemed to have fallen on deaf ears, with Trump’s Iran envoy saying on Friday sanctions would remain in place to end Iranian oil exports altogether.

“We will sanction any imports of Iranian crude oil… There are right now no oil waivers in place,” Brian Hook, the U.S. Special Representative On Iran, told reporters in London.

European countries, which opposed Trump’s decision to abandon the deal and reimpose sanctions, have promised to find ways to allow Iran access to trade in return for continuing to comply. But in practice, the effort has failed, with major European companies canceling all plans to invest in Iran.

Iran has set a number of deadlines in recent weeks after which it would cease complying with specific terms of the nuclear deal. The first expired on Thursday, the date Tehran said the quantity of enriched uranium it is holding could exceed the deal’s permissible threshold.

Diplomats in Vienna, headquarters of the U.N. nuclear agency IAEA, told Reuters on Thursday that the latest data from inspectors suggested the threshold had not yet been breached, but it could be as soon as Saturday or Sunday.

Another deadline, when Iran says it could enrich uranium to a purity forbidden under the deal, expires on July 7.

Iran says that if it does exceed thresholds, the steps would be reversible and it still aims to keep the deal in place.

The crisis between Iran and the United States that began with Trump’s withdrawal from the pact has escalated in recent weeks after Washington sharply tightened its sanctions from the start of May to halt all Iranian oil exports.

The Trump administration argues that the 2015 agreement reached under his predecessor Barack Obama was too weak because many terms are not permanent and it excludes non-nuclear issues such as missiles and Iran’s regional behavior. Washington says the aim of sanctions is to force Tehran to renegotiate.

Tehran says there can be no talks as long as sanctions are in place and Washington is ignoring the deal it already signed.

The confrontation took on a military dimension in recent weeks, with Washington blaming Tehran for attacks on ships in the Gulf, which Iran denies. Iran shot down a U.S. drone last week, saying it had entered its air space. Washington said the drone was in international skies, and Trump ordered, then aborted, retaliatory air strikes on Iranian targets.

Any move by Iran that violated the terms of the nuclear deal would put pressure on the Europeans to take sides.

“We will repeat to the Iranians that nuclear issues are not negotiable. We want them to stay in the accord, but we won’t accept them messing us around,” a senior European diplomat said before Friday’s meeting.

The cornerstone of European efforts to placate the Iranians is the creation of INSTEX, a mechanism to use barter to allow some trade that would avoid entanglement in U.S. sanctions.

Almost six months after it was created, it is still not operational and diplomats say it will be able to handle only small volumes for items like medicine, not the large oil sales Iran is seeking.

“If INSTEX fails to meet Iran’s demands within the framework of the nuclear deal, we will take the next steps more decisively,” Mousavi said, adding that “the implementation of the EU’s trade mechanism has been delayed due to some lack of commitments”.

(Additional reporting by Bozorgmehr Sharafedin and Guy Faulconbridge in London and Parisa Hafezi in Dubai; Editing by Peter Graff)